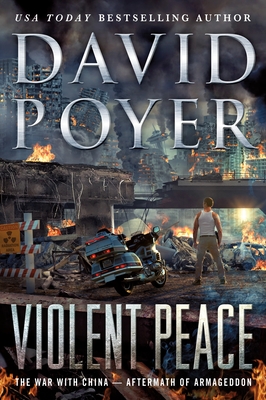 This is book number 20 in the Dan Lenson Novels series.

World War III is over… or is it? Superpowers race to fill the postwar power vacuum in this page-turning thriller, the next in the Dan Lenson series.

In the next installment of David Poyer’s critically-acclaimed series about war with China, mutual exhaustion after a massive nuclear exchange is giving way to a Violent Peace.

While Admiral Dan Lenson motorcycles across a post-Armageddon US in search of his missing daughter, his wife Blair Titus lands in a spookily deserted, riot-torn Beijing to negotiate the reunification of Taiwan with the rest of China, and try to create a democratic government.

But a CIA-sponsored Islamic insurgency in Xianjiang province is hurtling out of control. Andres Korzenowski, a young case officer, must decide whether ex-SEAL Master Chief Teddy Oberg—now the leader of a ruthless jihad—should be extracted, left in place, or terminated.

Meanwhile, Captain Cheryl Staurulakis and USS Savo Island are recalled to sea, to forestall a Russian fleet intent on grabbing a resource-rich Manchuria.

The violent and equivocal termination of the war between China and the Allies has brought not peace, but dangerous realignments in the endless game of great power chess. Will the end of one world war simply be the signal for the beginning of another?

"Evocative prose is a plus, and the ending opens new territory to explore in coming volumes. This is a series like no other in the military thriller genre."
—Publishers Weekly (starred review)

“Another fast-paced adventure…One of Poyer’s trademarks is to transport the reader from the highest strategic levels (peace negotiations and presidential maneuvering) to the tactical level (the bridge of a warship or a raggedy rebel squad setting an ambush).”
—The Virginian-Pilot