Among Others: A Novel (Paperback) 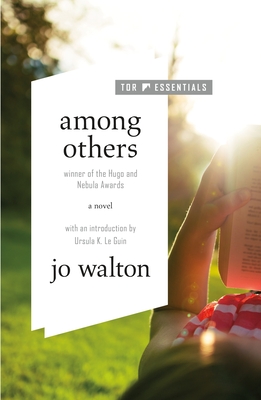 Among Others: A Novel (Paperback)

Startling, unusual, and yet irresistably readable, Jo Walton's Among Others is at once the compelling story of a young woman struggling to escape a troubled childhood, a brilliant diary of first encounters with the great novels of modern fantasy and SF, and a spellbinding tale of escape from ancient enchantment.

Raised by a half-mad mother who dabbled in magic, Morwenna Phelps found refuge in two worlds. As a child growing up in Wales, she played among the spirits who made their homes in industrial ruins. But her mind found freedom and promise in the science fiction novels that were her closest companions. Then her mother tried to bend the spirits to dark ends, and Mori was forced to confront her in a magical battle that left her crippled--and her twin sister dead.

Fleeing to her father whom she barely knew, Mori was sent to boarding school in England–a place all but devoid of true magic. There, outcast and alone, she tempted fate by doing magic herself, in an attempt to find a circle of like-minded friends. But her magic also drew the attention of her mother, bringing about a reckoning that could no longer be put off…

Combining elements of autobiography with flights of imagination in the manner of novels like Jonathan Lethem's The Fortress of Solitude, this is potentially a breakout book for an author whose genius has already been hailed by peers like Kelly Link, Sarah Weinman, and Ursula K. Le Guin.

JO WALTON won the Hugo and Nebula Awards for her novel Among Others and the Tiptree Award for her novel My Real Children. Before that, she won the John W. Campbell Award for Best New Writer, and her novel Tooth and Claw won the World Fantasy Award. The novels of her Small Change sequence—Farthing, Ha'penny, and Half a Crown—have won acclaim ranging from national newspapers to the Romantic Times Critics' Choice Award. A native of Wales, she lives in Montreal.

URSULA K. LE GUIN (1929-2018) was the celebrated and beloved author of numerous groundbreaking works, such as The Left Hand of Darkness, A Wizard of Earthsea, and The Dispossessed. The breadth and imagination of her work earned her six Nebulas, nine Hugos, and SFWA’s Grand Master, along with the PEN/Malamud and many other awards. In 2014 she was awarded the National Book Foundation Medal for Distinguished Contribution to American Letters, and in 2016 joined the short list of authors to be published in their lifetimes by the Library of America.