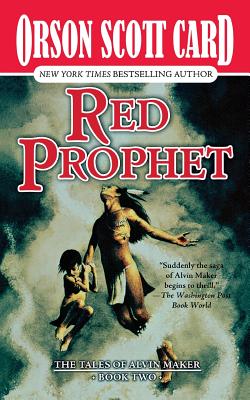 This is book number 2 in the Alvin Maker series.

Come here to Orson Scott Card's magical America that might have been, and marvel as the tale of Alvin Maker unfolds. The seventh son of a seventh son is a boy of mysterious powers, and he is waking to the mysteries of the land and its own chosen people.

“Red Prophet is but a section of a vast American fantasy epic. It is vividly written, and the principal actors--Alvin, Ta-Kumsaw, the Prophet, and Alvin's Gandalfesque mentor Taleswapper--are all complete and memorable characters.” —The Philadelphia Inquirer

“Harsher, bleaker, and more mystical than Seventh Son, this novel superbly demonstrates Card's solid historical research, keen understanding of religious experience, and, most of all, his mastery of the art of storytelling.” —Booklist