The Darkness Knows: A Novel (Hardcover) 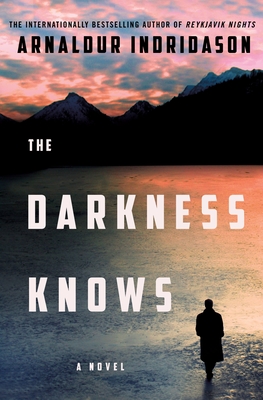 Retired detective Konrad returns to a haunting cold case in The Darkness Knows by Arnaldur Indridason, the "undisputed King of the Icelandic thriller." —The Guardian (UK)

A frozen body is discovered in the icy depths of Langjökull glacier, apparently that of a businessman who disappeared thirty years before. At the time, an extensive search and police investigation yielded no results—one of the missing man’s business associates was briefly held in custody, but there wasn’t enough evidence to charge him.

Now the associate is arrested again and Konrad, the retired policeman who originally investigated the disappearance, is called back to reopen the case that has weighed on his mind for decades.
When a woman approaches him with new information that she obtained from her deceased brother, progress can finally be made in solving this long-cold case.

In The Darkness Knows, the master of Icelandic crime writing reunites readers with Konrad, the unforgettable retired detective from The Shadow District. This is a powerful and haunting story about the poisonous secrets and cruel truths that time eventually uncovers.

"In this rewarding gumshoe investigation focused on complex deceptions and unlikely coincidences, introspective Konrád faces his failures, both in marriage and policing here, and finds resolution, if not peace." —Booklist

"One characteristic of Scandinavian noir is the way that inhospitable weather plays a role in the story, and this has never been truer than in Arnaldur Indridason's The Darkness Knows. In the Icelandic crime-writing standard-bearer's invigoratingly atmospheric thriller, the frozen body of a man who's been missing since 1985 is found on the Langjökull glacier...a multifaceted thriller." —Shelf Awareness

"The Darkness Knows is slowly and deliberately plotted...Indridason is a consummate storyteller, one of the cream of the Nordic noir crop, and if methodical police procedurals are your thing, you have come to the right place." —BookPage

"Indridason, a well-seasoned writer, has created an intricate plot with a diverse cast of players, acutely probing the relationships within Iceland’s tightly knit communities." —The Seattle Times on The Darkness Knows

"The Darkness Knows is a tragic tale...the intrepid Indridason reveals that the only escape from the past is death." —The Times (UK)

"Indridason methodically builds a portrait of Iceland with a large cast of nuanced characters unsettled by past events...The intricate plot poignantly depicts community crosscurrents, past and present." —Kirkus on The Darkness Knows

"As fascinating as this caper is, it is Konrad’s persona that holds the reader. A recent widow, with a checkered past, Konrad is greatly flawed." —David Rothenberg, WBAI/Radio on The Darkness Knows

"One of the most brilliant crime writers of his generation." —The Sunday Times (UK)

“A haunting and elegant novel . . . a writer of astonishing gravitas and talent." —John Lescroart on The Shadow Killer

"There's always a solid sense of history in Arnaldur Indridason's moody Icelandic mysteries. With his usual delicate touch, Indridason weaves in just enough folklore to remind us that a nation can never live down its legends." —New York Times Book Review on The Shadow District

"The undisputed King of the Icelandic Thriller." —The Guardian (UK)