The Mist: A Thriller (The Hulda Series #3) (Hardcover) 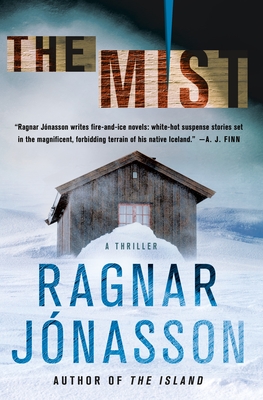 This is book number 3 in the The Hulda Series series.

The final nail-biting installment in Ragnar Jonasson's critically-acclaimed Hidden Iceland series, The Mist, from the newest superstar on the Icelandic crime fiction scene.

1987. An isolated farm house in the east of Iceland.

The snowstorm should have shut everybody out. But it didn't.

The couple should never have let him in. But they did.

An unexpected guest, a liar, a killer. Not all will survive the night. And Detective Hulda will be haunted forever.

RAGNAR JONASSON is an international number one bestselling author who has sold over two million books in thirty-two countries worldwide. His books include the Dark Iceland series and the Hulda series. Jonasson was born in Reykjavik, Iceland, where he also works as an investment banker and teaches copyright law at Reykjavik University. He has previously worked on radio and television, including as a TV news reporter for the Icelandic National Broadcasting Service, and, since the age of seventeen, has translated fourteen of Agatha Christie's novels. Ragnar is the co-founder of the Reykjavik international crime writing festival Iceland Noir. His critically acclaimed international bestseller The Darkness is soon to be a major TV series. Jonasson lives in Reykjavik with his wife and two daughters.

Ragnar Jonasson hailed as one of "the heirs to the Agatha Christie crown" by The Daily Telegraph (UK).

Praise for The Mist:

"Jónasson weaves his suspenseful tales together with remorseless logic up to a climax more nightmarish than the buildup." —Kirkus Reviews

"Jonasson is a master of the Icelandic thriller, and he's back with the final installment in the Hidden Iceland series...a case that haunts one detective for decades." —New York Post

"If you’re looking for a fictional good fright to distract you from the real ones, look no further than this third entry in the Hidden Iceland series." —Washington Post

"With The Mist, [Jonasson] earns a comparison...Stephen King at his chilling best. The Mist's slow-boil suspense and isolated snow-blighted setting can't help but conjure King's The Shining, but Jónasson's meticulous plotting bears the mark of a Christie scholar." —Shelf Awareness

"[Seeded] with subtle hints that something altogether different lies beneath the surface...Jónasson plays with our assumptions and keeps us off balance throughout this expertly constructed novel." —Air Mail

"Jonasson turns up the tension to a nearly unendurable degree...Masterfully plotted and paced, The Mist is atmospheric, haunting, and not for the faint of heart." —BookPage

"Ragnar Jónasson is a true master of suspense...a multi-layered story at the perfect pace." —The Nerd Daily

"The third and final episode of Hidden Iceland…into which Jónasson weaves a haunting thread of parental loss and revenge." —Booklist

"The word 'thriller' achieves new meaning when you’ve read The Mist. Jonasson is shameless, shows no mercy, as he pulls the reader in, almost holding you hostage, so intoxicating is the drama...breathless at the end of every chapter, desperate to learn what happens next." —David Rothernberg, WBAI-FM's Any Saturday

"[Hulda] performs some nifty puzzle-sorting in a narrative that the excellent Ragnar Jonasson handles with a persuasive balance of simplicity and mystery." —Toronto Star

“This is Icelandic noir of the highest order, with Jonasson’s atmospheric sense of place, and his heroine’s unerring humanity shining from every page.” —Daily Mail, UK

“A world-class crime writer...one of the most astonishing plots in modern crime fiction...The Mist is a triumphant conclusion to the trilogy and makes Iceland’s pre-eminence in the crime genre even more marked....Jónasson is up there with the best.” —The Sunday Times, UK

"[Jonasson] deals in vertiginous, unputdownable stories that are nevertheless still imbued with melancholy and heartbreak. This, the third of his series featuring downbeat female policewoman Hulda Hermannsdottir, is his best yet." —Metro Daily (UK)

“... it is about people, things we do not notice, what we misinterpret and what can ruin our lives because we did not pay attention. Ragnar Jónasson is a brilliant storyteller, who skillfully tells the story on multiple time levels, with different main characters and surprising twists. It is frighteningly believable, and exciting to the end.” —Dagens Nyheter, Sweden

Praise for The Island:

"One of the author's best plots, layered with that dour Scandinavian atmosphere we love." —New York Times Book Review

"Ragnar Jonasson is the Stephen King of Icelandic thrillers." —She Reads