What Souls Are Made Of: A Wuthering Heights Remix (Remixed Classics #4) (Hardcover) 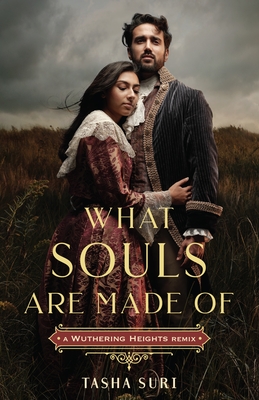 What Souls Are Made Of: A Wuthering Heights Remix (Remixed Classics #4) (Hardcover)

What Souls Are Made Of, British Fantasy Award-winning author Tasha Suri's masterful new take on Brontë's Wuthering Heights and fourth book in the Remixed Classics, will leave readers breathless.

Yorkshire, North of England, 1786. As the abandoned son of a lascar—a sailor from India—Heathcliff has spent most of his young life maligned as an "outsider." Now he's been flung into an alien life in the Yorkshire moors, where he clings to his birth father's language even though it makes the children of the house call him an animal, and the maids claim he speaks gibberish.

Catherine is the younger child of the estate's owner, a daughter with light skin and brown curls and a mother that nobody talks about. Her father is grooming her for a place in proper society, and that's all that matters. Catherine knows she must mold herself into someone pretty and good and marriageable, even though it might destroy her spirit.

As they occasionally flee into the moors to escape judgment and share the half-remembered language of their unknown kin, Catherine and Heathcliff come to find solace in each other. Deep down in their souls, they can feel they are the same.

But when Catherine's father dies and the household's treatment of Heathcliff only grows more cruel, their relationship becomes strained and threatens to unravel. For how can they ever be together, when loving each other—and indeed, loving themselves—is as good as throwing themselves into poverty and death?

Praise for What Souls Are Made Of:

"With its brooding characters, gorgeous setting, and a romance that sparkles with electricity, this retelling of Wuthering Heights breathes fresh air into an old classic." —Stacey Lee, New York Times-bestselling author of The Downstairs Girl and Luck of the Titanic

The Remixed Classics Series
A Clash of Steel: A Treasure Island Remix by C.B. Lee
So Many Beginnings: A Little Women Remix by Bethany C. Morrow
Travelers Along the Way: A Robin Hood Remix by Aminah Mae Safi
What Souls Are Made Of: A Wuthering Heights Remix by Tasha Suri
Self-Made Boys: A Great Gatsby Remix by Anna-Marie McLemore
My Dear Henry: A Jekyll & Hyde Remix by Kalynn Bayron
Teach the Torches to Burn: A Romeo & Juliet Remix by Caleb Roehrig
Into the Bright Open: A Secret Garden Remix by Cherie Dimaline
Most Ardently: A Pride & Prejudice Remix by Gabe Cole Novoa

Tasha Suri is an award-winning author, occasional librarian and cat owner. Her South Asian influenced epic fantasy novels include The Books of Ambha duology (Empire of Sand and Realm of Ash), and The Jasmine Throne. When she isn't writing, Tasha likes to cry over TV shows, buy too many notebooks, and indulge her geeky passion for reading about South Asian history. She lives with her family in a mildly haunted house in London. What Souls Are Made Of: A Wuthering Heights Remix is her YA debut.

Praise for What Souls Are Made Of:

"A gorgeously reclaimed Gothic. Atmospheric and incisive, What Souls Are Made Of cuts deep into the question of identity and the ghosts of legacy haunting these windswept moors. I’m a Tasha Suri fan for life." —Chloe Gong, New York Times-bestselling author of These Violent Delights

"With its brooding characters, gorgeous setting, and a romance that sparkles with electricity, this retelling of Wuthering Heights breathes fresh air into an old classic." —Stacey Lee, New York Times-bestselling author of The Downstairs Girl and Luck of the Titanic

"Hopeful and heartbreaking, this remix of Brontë’s classic is a magnificent, beautifully written ode to love, family and belonging.” —Sangu Mandanna, author of The Celestial Trilogy and Kiki Kallira Breaks a Kingdom

"Suri uses historical information of white colonialism overtaking India to provide a realistic depiction of the time. ... Lovers of Brontë’s classic will appreciate the message of this modified story: no matter what roads we’ve taken, we’re all entitled to kindness in this world." —Booklist

"This remix of Wuthering Heights is an epic piece of historical fiction, and a testament to Suri's incredible storytelling skills." —Buzzfeed

"'Fun' doesn’t even begin to describe this rich and imaginative retelling of Treasure Island. ... It’s obvious that this book was a labor of love, which made it all the more enjoyable to read. Pirate stories don’t get much better than this." —Hypable, on A Clash of Steel: A Treasure Island Remix by C.B. Lee

"Morrow’s ability to take the lingering stain of slavery on American history and use it as a catalyst for unbreakable love and resilience is flawless. That she has remixed a canonical text to do so only further illuminates the need to critically question who holds the pen in telling our nation’s story." —Booklist, starred review, on So Many Beginnings: A Little Women Remix by Bethany C. Morrow

"Morrow's nuanced take on what life was like for newly freed Black people at this time will prompt readers to reconsider the simplistic good vs. evil, North vs. South mythologies that characterize too many Civil War narratives. ... Alcott fans and newcomers alike will find much to appreciate in Morrow's sophisticated remix." —BookPage, starred review, on So Many Beginnings: A Little Women Remix by Bethany C. Morrow

"Impressive ... Via delicately written characterizations, each March woman exemplifies the notion that the wounds of bondage don’t disappear simply because freedom is at hand, and the racist catalyst of enslavement doesn’t disappear with the stroke of a pen, as a beloved story gains new meaning through the lens of enduring Black resilience, love, and hope." —Publishers Weekly, starred review, on So Many Beginnings: A Little Women Remix by Bethany C. Morrow

"Travelers Along the Way is the Robin Hood retelling I did not know I wanted. Deeply researched and masterfully written, here is a story that’s not only thrilling, but also delightfully clever! Rahma al-Hud and her band of merry misfits will appeal to history buffs and adventure seekers alike. A must read!" —Tanaz Bhathena, author of A Girl Like That and Hunted by the Sky, on Travelers Along the Way: A Robin Hood Remix by Aminah Mae Safi

"If you love heists, found family, and stealing from the rich and giving to the poor, then put Aminah Mae Safi's heartfelt and humorous take on Robin Hood at the very top of your TBR. Sisterhood, cunning disguises, and a bit of horse thievery: Travelers Along the Way is an adventure story that has it all." —Jodi Meadows, New York Times-bestselling co-author of My Lady Jane, on Travelers Along the Way: A Robin Hood Remix by Aminah Mae Safi

Praise for Empire of Sand:

Named one of TIME's Top 100 Fantasy Books of All Time

"An ode to the quiet, fierce strength of women. . . pure wonder." —Samantha Shannon, New York Times-bestselling author of The Priory of the Orange Tree

"Stunning and enthralling." —S. A. Chakraborty, USA Today-bestselling author of The City of Brass

Praise for Realm of Ash:

"A poignant story of finding one's place in a world warped by prejudice, court intrigue, violence, and sorcery. ... Those with a penchant for lyrical prose, intricate world building, beautifully imagined characters, compelling immersive folklore, and a fascinating look into a setting reminiscent of the Mughal Empire need look no further." —Booklist, starred review

"Suri's companion to Empire of Sand continues to expand on the stark beauty and power of this magical realm. With striking characters and court intrigue, this story is dark, melodious, and memorable." —Library Journal, starred review

Praise for The Jasmine Throne:

"Suri astounds with the spellbinding epic fantasy that launches her Burning Kingdoms trilogy. ... A fierce, heart-wrenching exploration of the value and danger of love in a world of politics and power. ... This is a blade-sharp, triumphant start to what promises to be an exciting series." —Publishers Weekly, starred review