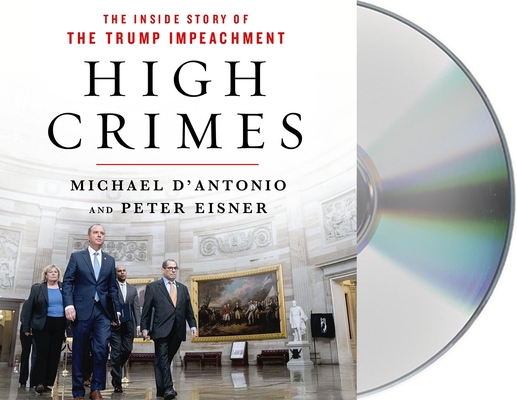 Two award-winning journalists offer the most comprehensive inside story behind our most significant modern political drama: the House impeachment of Donald Trump.

Having spent a year essentially embedded inside several House committees, Michael D'Antonio and Peter Eisner draw on many sources, including key House leaders, to expose the politicking, playcalling, and strategies debated backstage and to explain the Democrats' successes and apparent public failures during the show itself.

High Crimes opens with Nancy Pelosi deciding the House should take up impeachment, then, in part one, leaps back to explain what Ukraine was really all about: not just Joe Biden and election interference, but a money grab and oil. In the second part, the authors recount key meetings throughout the run up to the impeachment hearings, including many of the heated confrontations between the Trump administration and House Democrats. And the third part takes listeners behind the scenes of those hearings, showing why certain things happened the way they did for reasons that never came up in public.

In the end, having illuminated every step of impeachment, from the schemes that led Giuliani to the Ukraine in 2016 to Fiona Hill's rebuking the Republicans' conspiracy theories, High Crimes promises to be Trump's Final Days.

As part of a team of journalists from Newsday, MICHAEL D'ANTONIO won the Pulitzer Prize for his reporting before going on to write many acclaimed books, including Atomic Harvest, The State Boys Rebellion, and The Truth About Trump. He has also written for Esquire, The New York Times Magazine, and Sports Illustrated. He lives in New York.

Peter Eisner has won national and international awards for his writing and investigative reporting as a foreign correspondent, editor and reporter atThe Washington Post, Newsday, and the Associated Press. His 2004 book The Freedom Line, which won the Christopher Award, is the story of young resistance workers who rescued Allied fighter pilots during World War II. Eisner was nominated for an Emmy in 2010 as a producer at PBS World Focus. He is based in Washington, D.C.

Winner of the prestigious Audie Award (for History and Audio Drama), veteran actor Robert Fass is equally at home in a wide variety of styles, genres, characters, and dialects. A seven-time Audie nominee with over 100 unabridged audiobooks to his credit, Robert has also earned multiple Earphones Awards, including for his narration of Joe Golem and the Drowning City by Mike Mignola and Christopher Golden. Robert has given voice to modern and classic fiction writers alike, including Ray Bradbury, Joyce Carol Oates, John Steinbeck, Carlos Fuentes, Isaac Asimov, Ellery Queen, Steve Berry, Jeffrey Deaver, and Nele Neuhaus, plus bestselling nonfiction works in history, politics, health, journalism, philosophy, and business.