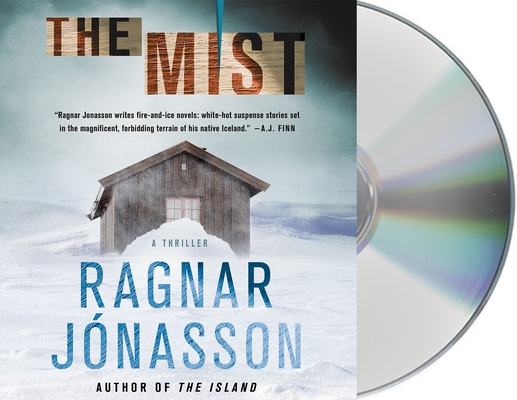 By Ragnar Jonasson, Amanda Redman (Read by)
$32.99
Email or call for price.

This is book number 3 in the The Hulda Series series.

The final nail-biting installment in Ragnar Jonasson's critically-acclaimed Hidden Iceland series, The Mist, from the newest superstar on the Icelandic crime fiction scene.

1987. An isolated farm house in the east of Iceland.

The snowstorm should have shut everybody out. But it didn't.

The couple should never have let him in. But they did.

An unexpected guest, a liar, a killer. Not all will survive the night. And Detective Hulda will be haunted forever.

"If you’re looking for a fictional good fright to distract you from the real ones, look no further than this third entry in the Hidden Iceland series (available June 23), featuring brainy, glum police inspector Hulda Hermannsdottir." -- Washington Post

RAGNAR JONASSON is an international number one bestselling author who has sold over two million books in thirty-two countries worldwide. His books include the Dark Iceland series and the Hulda series. Jonasson was born in Reykjavik, Iceland, where he also works as an investment banker and teaches copyright law at Reykjavik University. He has previously worked on radio and television, including as a TV news reporter for the Icelandic National Broadcasting Service, and, since the age of seventeen, has translated fourteen of Agatha Christie's novels. Ragnar is the co-founder of the Reykjavik international crime writing festival Iceland Noir. His critically acclaimed international bestseller The Darkness is soon to be a major TV series. Jonasson lives in Reykjavik with his wife and two daughters.

"One of the author's best plots, layered with that dour Scandinavian atmosphere we love." —New York Times Book Review on The Island

"Ragnar Jonasson is the Stephen King of Icelandic thrillers." —She Reads

"Masterly...Jónasson delivers a mind-bending look into human darkness that earns its twists." —Publishers Weekly (starred review) on The Island