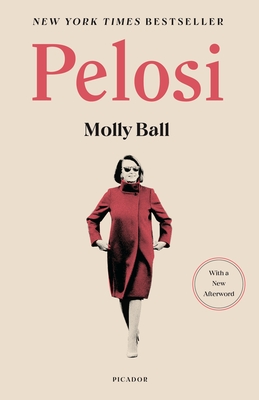 A riveting inside account of the unprecedented rise to power and unmatched political legacy of the first woman Speaker of the House, by award-winning journalist Molly Ball

Nancy Pelosi’s opposition to Donald Trump has made her an icon of the Resistance, featured in viral memes clapping sardonically at the president or ripping up his State of the Union address. But the real Nancy Pelosi is neither the shrill partisan featured in thousands of attack ads nor the cautious corporatist reviled by the far left. She’s the rare politician who still knows how to get big things done—a master of legislative power whose policy accomplishments have touched millions of American lives, from providing universal access to health care to reforming Wall Street to allowing gay people to serve openly in the military. She’s done it all at a time of historic polarization and gridlock, despite being routinely underestimated by allies and opponents alike.

Ball’s nuanced, page-turning portrait takes readers inside Pelosi’s life and times, from her roots in urban Baltimore to her formative years as a party activist and fundraiser, from the fractious politics of San Francisco to high-stakes congressional negotiations with multiple presidents. The result is a compelling portrait of a barrier-breaking woman that sheds new light on American political history. Based on exclusive interviews with the Speaker and deep background reporting, Ball shows Pelosi through a thoroughly modern lens to explain how this extraordinary woman has met her moment.

Molly Ball is TIME magazine's national political correspondent and a political analyst for CNN. She appears regularly on PBS's Washington Week, CBS's Face the Nation, ABC's This Week, and other television and radio programs. Ball is the winner of numerous awards for her coverage of American politics, including the Gerald R. Ford Journalism Prize and the Toner Prize for Excellence in Political Reporting. She grew up in Idaho and Colorado and lives in the Washington, DC, area with her husband and three children.

“[An] illuminating new biography of the most powerful woman in American politics.” —Michelle Goldberg, The New York Times Book Review

“[A] smart, solid biography with a lesson: Despite our current fixation on political showmanship, politics works best in a complicated democracy like ours when its practitioners can navigate their way through the byzantine cloakrooms of power." —Joe Klein, The Washington Post

“There's a delicious scene in Pelosi where she chases down a Republican congressman who had disparaged her and shouts, ‘You're an insignificant person,’ at him again and again. Whether taking on a low-level back-bencher in the House or President Trump in the Oval Office, Nancy Pelosi could never be called insignificant, as Molly Ball so revealingly documents in this absorbing book.” —David Maraniss, Pulitzer Prize-winning author of First in His Class: The Biography of Bill Clinton

“Even dedicated political junkies will learn something new about the controversial figure in this comprehensive look.” —Good Housekeeping

“Molly Ball’s Pelosi is the inspirational political book we’ve all been waiting for. In this dark season, Ball shines a light on the nearly heroic Speaker and her unwavering commitment to truth, justice, and well-tailored jackets. This is the definitive biography of an icon.”—Vanessa Grigoriadis, author of Blurred Lines: Rethinking Sex, Power, and Consent on Campus

“An engrossing and deeply reported political biography of an astute and powerful woman. Molly Ball’s lively portrait of Nancy Pelosi, twice Speaker of the House, is packed with sage insights and telling anecdotes. This sparkling new take on Pelosi makes us understand how this ‘San Francisco liberal’—often the only woman in the room—has become America’s most consequential legislator since the days of LBJ.” —Kai Bird, Pulitzer Prize-winning biographer

"A great read about a great woman. Pelosi is timely and valuable, not only for women who will be inspired by her ability to sequence a career from motherhood to national power, but for all Americans who still believe that politics is not only the ‘art of the possible,’ but also a path to lasting progressive change." —Anne-Marie Slaughter, CEO, New America

“A lively and detailed portrait…Ball’s accessible review of recent legislative history and behind-the-scenes coverage of congressional matters provide valuable insights for political junkies. Even readers who don’t entirely agree with Pelosi’s agenda will gain respect for her accomplishments and tenacity.” —Publishers Weekly

"Read this book, not just to understand how Nancy Pelosi operates as Speaker of the House, but to understand HOW she became the first female Speaker in American history. Molly Ball, one of the most perceptive political reporters in the country, takes readers on a journey through Pelosi's formative political experiences, which parallels the transformation of the political process over the last 60 years." —Amy Walter, national editor for the Cook Political Report

“[A] sharp, lively biography…With deft political analysis, the author charts Pelosi’s rise in the ranks, her relationships with George W. Bush, Obama, and Trump, and her record.” —The Christian Science Monitor

“Even after years spent covering the House, and three different Speakers, I have a far richer and more intimate understanding of Nancy Pelosi after reading Molly Ball’s masterwork. Molly Ball's achievement with PELOSI is telling us what makes the most powerful woman in American history tick. With that knowledge, we can now examine the Speaker’s every accomplishment—political and personal—in the sweeping, elegant context her legacy demands." —Tim Alberta, New York Times bestselling author of American Carnage

“An entertaining and balanced biography of Nancy Pelosi…Ball offers plenty of insightful anecdotes, presenting events within historical perspective so that readers can fully appreciate their import.” —Booklist, *starred review*