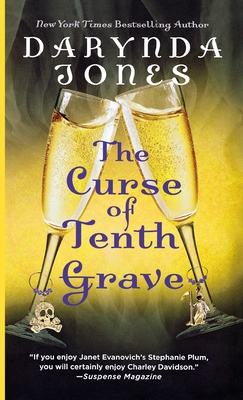 This is book number 10 in the Charley Davidson Series series.

If one door closes and another one opens,
your house is probably haunted.
—Bumper Sticker

As a Part-time PI and fulltime grim reaper, Charley Davidson has asked a lot of questions throughout her life: Why can I see dead people? Who is the hot supernatural entity following me? How do I get gum out of my sister’s hair before she wakes up? But, “How do I trap not one malevolent god, but three?” was never among them. Until now. And since those gods are on earth to kill her daughter, she has little choice but to track them down, trap them, and cast them from this dimension.

There’s just one problem. One of the three stole her heart a very long time ago. Can the Razer, a god of absolute death and destruction, change his omniscient spots, or will his allegiances lie with his brothers?

Those are just a few of the questions Charley must answer, and quick. Add to that a homeless girl running for her life, an innocent man who’s been charged with murdering the daughter of a degenerate gambler, and a pendant made from god glass that has the entire supernatural world in an uproar, and Charley has her hands full. If she can manage to take care of the whole world-destroying-gods thing, we’re saved. If not, well…

Praise for the Grave!
“Sexy, sassy…Jones’s characters, both living and dead, are colorful and endearing.” —The Associated Press on First Grave on the Right

“Jones makes a truly memorable debut with her unique tale that is sexy, mysterious, and sarcastically fun!” –RT book Reviews on First Grave on the Right

“Charley continues to fascinate.” –Booklist on Third Grave Dead Ahead

“Fourth Grave Beneath My Feet continues to blend paranormal, romance, and mystery better than any other contemporary work out there.” —Heroes and Heartbreakers

“Jones has hit on the perfect recipe for a wisecracking, wickedly funny romp that is edged with truly chilling danger…sexy and mysterious.”—RT Book Reviews on Fifth Grave Past the Light

“Übertalented Jones keeps stirring the pot and throwing in crazy new developments, guaranteed to keep her characters and readers zanily off balance.” –RT Book Reviews on Sixth Grave on the Edge

“Seventh Grave and No Body is Charley at her finest!” –Fresh Fiction

“Crafty Jones shakes things up in a most diabolical way. As always, there is plenty of the weird and wacky, but there is also a heaping dose of high-stakes drama and poignancy. This is one fantastic read!” –RT Book Reviews (4 ½ stars) on Eighth Grave After Dark

“[T]he romance delights. Jones continues to make her Grim Reaper into a layered, fascinating heroine.” –Booklist on The Dirt on Ninth Grave