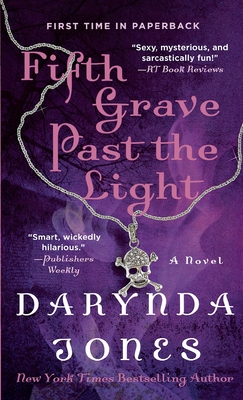 This is book number 5 in the Charley Davidson Series series.

Never underestimate the power of a woman

on a double espresso with a mocha latte chaser high.

Charley Davidson isn't your everyday, run-of-the-mill grim reaper. She's more of a paranormal private eye/grim reaper extraordinaire. However, she gets sidetracked when the sexy, sultry son of Satan, Reyes Farrow, moves in next door. To further complicate matters, Reyes is her main suspect in an arson case. Charley has vowed to stay away from him until she can find out the truth…but then dead women start appearing in her apartment, one after another, each lost, confused, and terrified beyond reason. When it becomes apparent that her own sister, Gemma, is the serial killer's next target Charley has no choice but to ask for Reyes' help. Arsonist or not, he's the one man alive who could protect Gemma no matter who or what came at her. But he wants something in return. Charley. All of her, body and soul. And to keep her sister safe, it is a price she is willing to pay.

Charley Davidson is at it again in Fifth Grave Past the Light, the sexy, suspenseful, and laugh-out-loud funny fifth installment of the New York Times bestselling series by Darynda Jones.

“Charlie continues to fascinate. Readers will be dying to know where the fourth grave is.” —Booklist on Third Grave Dead Ahead

“Funny, action-packed new . . . There is murder and mystery aplenty as Jones' fun read.” —RT Book Reviews on Second Grave on the Left

“Jones skillfully establishes the novel's setting and keeps up the pace with plenty of action. And let's be honest--the sex is pretty hot, too. Fans of Sherrilyn Kenyon and other authors of paranormal romance will love this series debut.” —Library Journal (starred) on First Grave on the Right

“The best debut novel I've read in years! Hilarious and heartfelt, sexy and surprising . . . I'm begging for the next one!” —J.R. Ward, New York Times bestselling author of Lover Unleashed on First Grave on the Right