To Walk Alone in the Crowd: A Novel (Paperback) 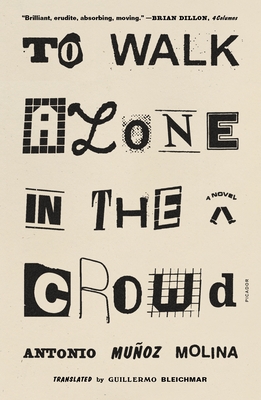 To Walk Alone in the Crowd: A Novel (Paperback)

Winner of the 2020 Medici Prize for Foreign Novel

From the award-winning author of the Man Booker Prize finalist Like a Fading Shadow, Antonio Muñoz Molina presents a flâneur-novel tracing the path of a nameless wanderer as he walks the length of Manhattan, and his mind.

De Quincey, Baudelaire, Poe, Joyce, Benjamin, Melville, Lorca, Whitman . . . walkers and city dwellers all, collagists and chroniclers, picking the detritus of their eras off the filthy streets and assembling it into something new, shocking, and beautiful. In To Walk Alone in the Crowd, Antonio Muñoz Molina emulates these classic inspirations, following their peregrinations and telling their stories in a book that is part memoir, part novel, part chronicle of urban wandering.

A skilled collagist himself, Muñoz Molina here assembles overheard conversations, subway ads, commercials blazing away on public screens, snatches from books hurriedly packed into bags or shoved under one’s arm, mundane anxieties, and the occasional true flash of insight—struggling to announce itself amid this barrage of data—into a poem of contemporary life: an invitation to let oneself be carried along by the sheer energy of the digital metropolis.

A denunciation of the harsh noise of capitalism, of the conversion of everything into either merchandise or garbage (or both), To Walk Alone in the Crowd is also a celebration of the beauty and variety of our world, of the ecological and aesthetic gaze that can, even now, recycle waste into art, and provide an opportunity for rebirth.

Antonio Muñoz Molina is the author of more than a dozen novels, including In the Night of Time, Sepharad, and Like a Fading Shadow. He is the recipient of numerous prizes and awards, including Spain’s National Narrative Prize, the Planeta Prize, the Medici Prize for Foreign Novel, and the Príncipe de Asturias Prize. He has been a full member of the Royal Spanish Academy since 1995. He lives in Madrid and New York City.

“The novel’s sprawling excess, its playful unwillingness to be any one thing, are its greatest strength and the source of its splendor. The investigation is in the realm not of the literary scholar but of the alchemist who seeks to know what combination of streets, boots, and perambulations influence the creative process, and by implication, what forces transform a reader into a writer.”
—Megin Jimenez, Chicago Review of Books

“Mr. Muñoz Molina is interested in how memory fuels imagination. But he also seeks a deeper confluence . . . All these strands come together in the closing section of the novel, which traces a long meander from southern Manhattan to the Bronx cottage where Poe once lived."
—David L. Ulin, The Wall Street Journal

"The solitary writer’s journeys and observations culminate in his discovery of solace in loving his wife, and his passion makes the narrative deeply rewarding. The result is a treasure trove."
—Publishers Weekly (starred)

"To Walk Alone in the Crowd is at once brilliant, erudite, absorbing, moving—and quite quaint, a sort of literary consolation, assuring us that defunct forms can still give us news about now. It is also a book that could only have been written today, as an act of engaged nostalgia: not so much for the materials and materiality that it constantly hymns, nor for the lives it describes at great historic remove, but for the sort of writing that detailed such things, the first time around."
—4Columns

"The unnamed narrator of 'To Walk Alone in the Crowd,'...seeks to construct a map for our time, a book of watching and thinking that is also a tribute to the great walking-authors of the past..[To Walk Alone in the Crowd has] many excellent passages, insightful biographical sketches about the lives of [Munoz Molina's] favorite writers or tender reflections on his beloved wife."
—Martin Riker, The New York Times

"[To Walk Alone in the Crowd] allows us to walk through cities even if only in dreams during these times of confinement."
—Marie Darrieussecq, author of Being Here Is Everything: The Life of Paula Modersohn-Becker