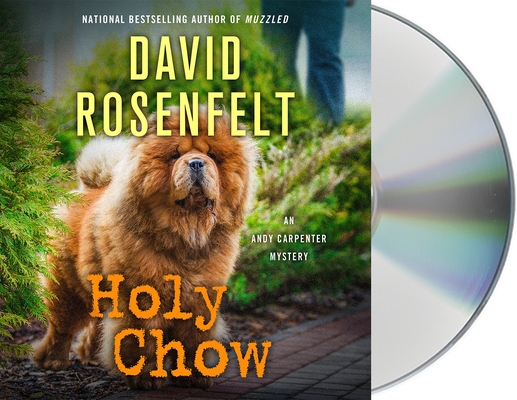 This is book number 25 in the An Andy Carpenter Novel series.

This program is read by longtime series and award-winning narrator, Grover Gardner.

In Holy Chow, the next mystery from bestselling author David Rosenfelt, the beloved characters—both human and canine—of this fan favorite series are back on the case with the author’s trademark wit and humor.

Retired lawyer Andy Carpenter’s calling has always been running the Tara Foundation. The dog rescue organization places hundreds of dogs in new homes every year. It’s added up to so many dogs and new owners that Andy can’t even do the math. But there’s one dog—and one owner—Andy will always remember.

About a year ago, Rachel Morehouse came to the foundation looking for a companion. In her sixties and recently widowed, Rachel wanted a senior dog that also needed someone. Andy took a liking to her, Rachel took a liking to Lion, an older Chow Chow, and the rest is history.

That is, until Rachel calls Andy begging for a favor: If Rachel dies, will Andy take care of Lion if her stepson cannot? Andy agrees, no questions asked, and promptly forgets about it... until he receives a call from Rachel’s estate to attend her will reading. Which is where he meets Rachel’s stepson, Tony, who is promptly arrested for his stepmother’s murder. And he wants Andy to prove his innocence.

Andy has continued to learn more about the woman he so greatly admired and the businesses she ran, and holy chow, was this woman impressive. The person who killed her deserves to be held accountable, and if Tony is to be believed, they’re still out there. And that possibility is too much for Andy to remain on the sidelines.