The Religious Revolution: The Birth of Modern Spirituality, 1848-1898 (Paperback) 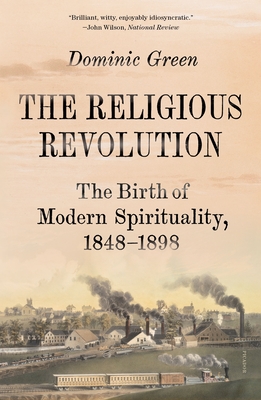 The Religious Revolution: The Birth of Modern Spirituality, 1848-1898 (Paperback)

“An incisive study of the Western world’s shift from institutional religion to more personal beliefs in the second half of the nineteenth century . . . This is intellectual history at its most comprehensive and convincing.” —Publishers Weekly (starred review)

The late nineteenth century was an age of grand ideas and great expectations fueled by rapid scientific and technological innovation. In Europe, the ancient authority of church and crown was overthrown for the volatile gambles of democracy and the capitalist market. If it was an age that claimed to liberate women, slaves, and serfs, it also harnessed children to its factories and subjected entire peoples to its empires. Amid this tumult, another sea change was underway: the religious revolution.

In The Religious Revolution, Dominic Green charts this profound cultural and political shift, taking us on a whirlwind journey through the lives and ideas of Ralph Waldo Emerson and Walt Whitman; of Éliphas Lévi and Helena Blavatsky; of Wagner and Nietzsche; of Marx, Darwin, and Gandhi. Challenged by the industrialization, globalization, and political unrest of their times, these figures found themselves connecting with the religious
impulse in surprising new ways, inspiring others to move away from the strictures of religion and toward the thrill and intimacy of spirituality. The modern era is often characterized as a time of increasing secularism, but in this trenchant new work, Green demonstrates how the foundations of modern society were laid as much by spirituality as by science or reason.

The Religious Revolution is a narrative tour de force that sweeps across several continents and five of the most turbulent and formative decades in history. Threading together seemingly disparate intellectual trajectories, Green illuminates how philosophers, grifters, artists, scientists, and yogis shared in a global cultural moment, borrowing one another’s beliefs and making the world we know today.

Dominic Green, PhD, FRHistS is a critic, historian and the deputy editor of The Spectator’s US edition. He writes widely on the arts and current affairs, and contributes regularly to The Wall Street Journal and the New Criterion. He is the author of the books Three Empires of the Nile, Armies of God, Benny Green: Words and Music, and The Double Life of Doctor Lopez. He lives in Cambridge, MA.

"Brilliant, witty, enjoyably idiosyncratic . . . [The Religious Revolution] is “literary” as much as it is “historical”. . . Part of what makes Green’s narrative so beguiling is his strong sense of irony."
—John Wilson, National Review

"An incisive study of the Western world’s shift from institutional religion to more personal beliefs in the second half of the 19th century . . . Throughout, Green draws illuminating connections between these transformational thinkers and briskly contextualizes the political, economic, and technological shocks of their epoch. This is intellectual history at its most comprehensive and convincing."
—Publishers Weekly, starred review

“Dominic Green’s focus on the second half of the nineteenth century as the moment when humanity started to look in a completely different way at everything metaphysical is inspired. His erudition is extraordinary as he takes the reader through the sometimes weird but occasionally wonderful worlds of alternative belief systems, mostly respectfully but with a pleasingly satirical edge for the more bizarre ones. I suspect this will remain the standard work on the subject for decades.”
—Andrew Roberts, author of Churchill: Walking with Destiny

“The Religious Revolution must be the most rollicking intellectual history of the Victorian age. It explains that Darwin, Madame Blavatsky, and Gandhi were carrying out a kind of common project, and it reveals why Nietzsche considered Emerson his ‘Brother-Soul’ in nihilism. Dominic Green is a consistently witty writer, and his book moves at the pace of a really good Victorian novel.”
—Christopher Caldwell, author of The Age of Entitlement

“With magisterial sweep and authority, Dominic Green recasts our understanding of the nineteenth century, revealing the great spiritual hunger that powered the revolutions and cultural upheavals we know from the standard histories. This is a buoyant, important, and exciting book.”
—Ruth R. Wisse, author of Free as a Jew: A Personal Memoir of National Self-Liberation

“This beautifully written and deeply researched book by Dominic Green purports to be a work of history. But really, it is a work of contemporary spiritual anatomy. Green deals with a host of nineteenth-century mountaintops—Emerson, Ruskin, Nietzsche, Darwin, Whitman, and many others—but his focus is firmly on the human heart. This is a profound and moving investigation of mankind’s deepest and most beguiling longings. The Religious Revolution is a book not for a season but for the ages.”
—Roger Kimball, editor and publisher of The New Criterion