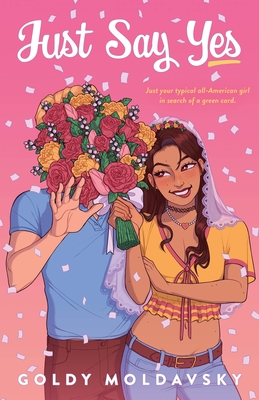 From New York Times–bestselling author Goldy Moldavsky comes a rom-com about your average high school senior in search of love . . . and a green card.

When high school senior Jimena Romero discovers that she's undocumented, she decides there's only one way to keep her life on track: Marry an American. She has plenty of candidates—her ex-boyfriend, random guys from dating apps, a starry-eyed activist who wants to help out a friend. This doesn't have to be about love.

Of course, marriage (!) is a much bigger deal than Jimena accounted for. It would be so much easier if the perfect, overachieving boy-next-door, Vitaly, could just do Jimena a favor and be her green card husband, no romantic strings attached. But Vitaly has his own plans for the future, and he's doing his best not to let anything, from love to immigration, derail them.

Goldy Moldavsky was born in Lima, Peru, and grew up in Brooklyn, New York, where she lives with her family. She is the New York Times–bestselling author of Kill the Boy Band and No Good Deed. Some of her influences include Buffy the Vampire Slayer, the esteemed works of John Irving, and the Mexican telenovelas she grew up watching with her mother.