Ever Green: Saving Big Forests to Save the Planet (Hardcover) 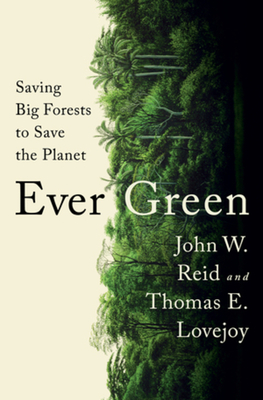 Clear, provocative, and persuasive, Ever Green is an inspiring call to action to conserve Earth’s irreplaceable wild woods, counteract climate change, and save the planet.

Five stunningly large forests remain on Earth: the Taiga, extending from the Pacific Ocean across all of Russia and far-northern Europe; the North American boreal, ranging from Alaska’s Bering seacoast to Canada’s Atlantic shore; the Amazon, covering almost the entirety of South America’s bulge; the Congo, occupying parts of six nations in Africa’s wet equatorial middle; and the island forest of New Guinea, twice the size of California.

These megaforests are vital to preserving global biodiversity, thousands of cultures, and a stable climate, as economist John W. Reid and celebrated biologist Thomas E. Lovejoy argue convincingly in Ever Green. Megaforests serve an essential role in decarbonizing the atmosphere—the boreal alone holds 1.8 trillion metric tons of carbon in its deep soils and peat layers, 190 years’ worth of global emissions at 2019 levels—and saving them is the most immediate and affordable large-scale solution to our planet’s most formidable ongoing crisis.

Reid and Lovejoy offer practical solutions to address the biggest challenges these forests face, from vastly expanding protected areas, to supporting Indigenous forest stewards, to planning smarter road networks. In gorgeous prose that evokes the majesty of these ancient forests along with the people and animals who inhabit them, Reid and Lovejoy take us on an exhilarating global journey.

John W. Reid is a conservationist and economist whose writing has appeared in the New York Times, Atlantic, and Scientific American. He lives in Sebastopol, California.

Thomas E. Lovejoy was a pioneering biologist who led and championed forest conservation efforts for over 50 years.

Eloquent and fact-filled.... Ever Green, for all its scholarly precision, is ultimately an impassioned plea to save the world’s last great wild places by two men who had come, through long professional acquaintance, to love them. Readers will find their passion to be contagious.

There is no better or more readable guide to the bewildering array of threats to forests or to the economic and institutional programs created to protect them. . . . It’s impossible to read Ever Green without being moved by the vision and commitment of the people—including its authors—who’ve devoted themselves to protecting the world’s forests.

Nothing could be more important than saving the world’s last remaining forests, and no one could make a more eloquent case for this than John Reid and Thomas Lovejoy. Ever Green is a must-read for anyone who cares about the future of life.

— Elizabeth Kolbert, author of Under a White Sky and The Sixth Extinction

John Reid and Thomas Lovejoy’s compelling and crucial narrative takes us to the astonishing intact cores of these lungs of our planet, these libraries of life that harbor diverse Indigenous peoples and multitudinous other-than-human beings. That so much remains is a welcome and uplifting revelation.
— Carl Safina, ecologist and author of Becoming Wild and Beyond Words

John Reid and Thomas Lovejoy make clear that the only way the world can prevent the worst of the coming climate disaster is by preserving and restoring its remaining megaforests.… Ever Green is a blueprint for saving megaforests, and saving ourselves.

— Scott Weidensaul, author of A World on the Wing

In the preservation of the remaining great forest landscapes of the world lies the very hope and perhaps the only hope of humanity to find a new way of living on this planet.… Ever Green itself is a prayer for the well-being of the earth.

— Wade Davis, author of Magdalena and Into the Silence

A very clear-eyed, practical and persuasive plan for how to save these forests, and maybe the rest of us in the process.
— Richard Powers - The Ezra Klein Show

Captivating.... A highly readable, eloquent reminder of the dire importance of our forests.
— Kirkus, starred review

[Reid and Lovejoy] convincingly argue in this trenchant work that preserving Earth’s five megaforests is vital to stop climate change.... The authors depict the flora and fauna of these far-flung locations in vivid descriptions that chart how each species is part of a vast ecosystem, and make a strong case for the inherent value of the plants, animals, and people that live in the megaforests. This clarion call should have a spot on the shelves of climate-minded readers.
— Publishers Weekly