I Used to Live Here Once: The Haunted Life of Jean Rhys (Hardcover) 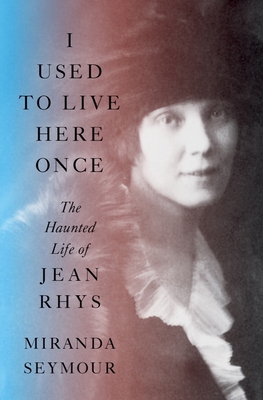 Jean Rhys is one of the most compelling writers of the twentieth century. Memories of her Caribbean girlhood haunt the four short and piercingly brilliant novels that Rhys wrote during her extraordinary years as an exile in 1920s Paris and later in England, a body of fiction—above all, the extraordinary Wide Sargasso Sea—that has a passionate following today. And yet her own colorful life, including her early years on the Caribbean island of Dominica, remains too little explored, until now.

In I Used to Live Here Once, Miranda Seymour sheds new light on the artist whose proud and fiercely solitary life profoundly informed her writing. Rhys experienced tragedy and extreme poverty, alcohol and drug dependency, romantic and sexual turmoil, all of which contributed to the “Rhys woman” of her oeuvre. Today, readers still intuitively relate to her unforgettable characters, vulnerable, watchful, and often alarmingly disaster-prone outsiders; women with a different way of moving through the world. And yet, while her works often contain autobiographical material, Rhys herself was never a victim. The figure who emerges for Seymour is cultured, self-mocking, unpredictable—and shockingly contemporary.

Based on new research in the Caribbean, a wealth of never-before-seen papers, journals, letters, and photographs, and interviews with those who knew Rhys, I Used to Live Here Once is a luminous and penetrating portrait of a fascinatingly elusive artist.

Richly detailed, exhaustively researched, and warmly sympathetic.... The biographer’s voice in I Used to Live Here Once is a steadying principle throughout the turbulent, disjointed life of Jean Rhys, corrective when necessary, at times rueful, bemused, but never intrusive or judgmental.

Seymour meticulously stitches Rhys’s stories to events in her life, while scrupulously maintaining the distinction Rhys herself insisted on: the women who people her fiction are not self-portraits.
— Madison Smartt Bell - American Scholar

A first-class life and a rollicking read. Seymour skilfully interweaves the autobiographical stories and novels with the people and fortunes in Rhys’s crazily adventurous life.... The result is close to a masterpiece.
— John Walsh - Sunday Times (UK)

Seymour’s investigations into Rhys are inseparable from her sensitive close readings of the novels. She is shrewd and careful.... [A] compelling biography.
— Amber Medland - Times Literary Supplement

Intimate and insightful. . . . [I Used to Live Here Once] is full of magics.

An eloquent defence of the biographer’s art in a clear-eyed yet sympathetic portrait of the extraordinary life of a complicated, not always likeable, woman.... Seymour is clearly a Rhys aficionada, albeit a subtle one, fully cognisant of the failings of the woman. [The] greatest service a literary biographer can perform is to send the reader back to her subject’s work with fresh insight, renewed pleasure and enhanced admiration. This, Seymour achieves magnificently.
— Annalena McAfee - Financial Times

Slyly compelling.... The narrative has the tension of a thriller.... However precarious her existence, as she appears in this biography Rhys always maintains an obscure dominion, if not over herself, then over other people. Her intransigence, capriciousness and abiding selfishness may not be pretty, but it’s these qualities that kept her going against all the odds.
— Rachel Cooke - The Guardian

Miranda Seymour has written a compelling and stylish new biography of Jean Rhys, whose life and work have often been cast in melancholic shadow. Seymour adds color and complexity to Rhys’s story, and suggests the haunting influence of her early years on the Caribbean island of Dominica. This is a fresh, empathetic portrait of an iconic and unconventional woman writer whose searing novels of trauma, race, gender, and exile were ahead of their time.
— Heather Clark, author of Red Comet: The Short Life and Blazing Art of Sylvia Plath

The multiple guises and conflicting personae of Jean Rhys—reckless and reclusive, captivating and appalling—demand a particularly agile biographer. Miranda Seymour is ideally suited to the task. An empathetic but unsparing critic, a tenacious and resourceful researcher, and a historian of literary cultures with a novelist’s sense of the evocative detail, she has produced an enthralling biography of a haunting—and maddening—modern writer.
— Elaine Showalter, Professor of English, Emeritus, Princeton University

It’s a high-wire act to hold so witty and eloquent a balance between this writer’s recklessness and diligence. The honesty too is appealing, the acknowledgement of dark places no one can fully visit.
— Lyndall Gordon, author of The Hyacinth Girl: T. S. Eliot's Hidden Muse

Brilliantly written, compulsively readable, and insightful, Miranda Seymour’s biography does full justice to a remarkable and complex life.
— Pat Barker, author of The Women of Troy and The Silence of the Girls

One of Miranda Seymour’s finest biographies, this is an utterly riveting voyage into a writer’s mind. You can almost feel Jean Rhys breathing in the room, and what a ferociously complicated woman she was! I was spellbound from start to finish.
— Deborah Moggach, author of These Foolish Things and Tulip Fever

Compelling.... An elegant work that provides readers with a better understanding of a beloved author’s life.
— Kirkus, starred review

Stellar.... Seymour chronicles the heroic generosity of Rhys’ friends and family, the devastating criticism that kept Rhys from publishing her work for nearly 30 years, and her late-in-life fame, sensitively portraying Rhys in all her fury and brilliance.
— Booklist, starred review

Since Jean Rhys’s death 42 years ago our obsession with her life and work ... has only grown.... Now it is Miranda Seymour’s turn to re-tell the story, with informative new material on her early life in the Caribbean, and a more generous tone than some of her predecessors.... Perhaps it’s that ghostly opacity that makes her such an intriguing subject—a writer on whom we can project our own fears and desires.
— Sameer Rahim - The Telegraph

An exhaustive, definitive ride around both the idea and the reality of Jean Rhys.... Authoritatively woven together, Seymour addresses a writer and woman who is at once self-absorbed and thoughtful, sardonic and sensitive, harnessing an independence that was created and sustained by circumstance, and deftly draws out the wildness of Rhys that threatened to break as well as make her. This is also a love letter to the different ways that writers work, and how they are not always disciples of discipline, how sometimes great work comes piecemeal and from the messy brutality of living. While Rhys herself wrote that she ‘would never really belong anywhere’, somehow, Seymour has brought her home.
— Siobhán Kane - Irish Times

Seymour makes a convincing case for Rhys’s intelligence and agency as an artist. The writer who emerges from these pages is not the sluttish savant of Alvarez’ fevered imagination, but a woman who fought heroically to realize her own prodigious talent and to salvage something lasting from the wreckage of her life.
— Zoë Heller - Book Post

One of the many strengths of this biography is that Seymour is aware of the danger of the too-easy read-across from fiction to life, while being alive to the hidden truths of literary archaeology.... A gem of literary biography.
— Alan Judd - The Oldie