You Loves Ewe! (A Yam and Donkey Book) (Hardcover) 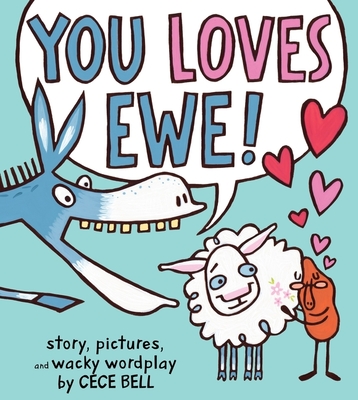 A side-splittingly funny picture book about a silly donkey, a cranky yam, and an irresistible ewe, packed with hilarious homonyms and the distinctive humor of Newbery Honoree Cece Bell. For fans of P is for Pterodactyl.

Hilarity meets homonyms in this high-comedy companion to I Yam a Donkey by Cece Bell. A persnickety spud, Yam, introduces the grammar-challenged Donkey to a new friend, Ewe, a lady sheep. The confusion between “ewe” and “you” results in a fabulously funny series of who’s-on-first misunderstandings, even though Yam explains the concept of homonyms to Donkey clearly enough for the youngest of readers to understand. Heightening the humor is an over-the-top love triangle, because everyone is in love with You. Err, Ewe. Perfect for Valentine’s Day or any day!

Cece Bell has written and illustrated many books for children, among them the beloved Sock Monkey books, the Geisel Award-winning Rabbit and Robot: The Sleepover, and the Newbery Honor-winning graphic novel El Deafo. She and her husband, author Tom Angleberger, have also collaborated on the picture book Crankee Doodle and the Inspector Flytrap chapter book series. She lives in Virginia with her family.

"Ah, the English language: Learning its quirks is a challenge for little readers and almost-readers, but Bell (“El Deafo”) brings irresistible humor to the task...with shades of Abbott and Costello, the comedy really lifts off." —The New York Times Book Review
★ "Ewe will love it! (You will too.)....the combination of language and images will have young readers in fits of giggles. The artwork beautifully conveys the zany hijinks....Hilarious. How will Yam and Donkey top this?"—Kirkus, STARRED review