Sickening: How Big Pharma Broke American Health Care and How We Can Repair It (Hardcover) 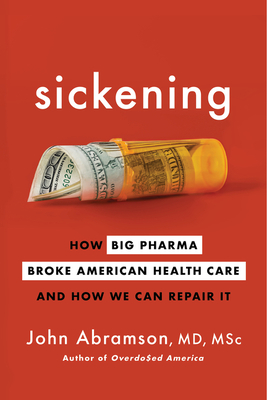 The United States spends an excess $1.5 trillion annually on health care compared to other wealthy countries—yet the amount of time that Americans live in good health ranks a lowly 68th in the world. At the heart of the problem is Big Pharma, which funds most clinical trials and therefore controls the research agenda, withholds the real data from those trials as corporate secrets, and shapes most of the information relied upon by health care professionals.

In this no-holds-barred exposé, Dr. John Abramson—one of the foremost experts on the drug industry’s deceptive tactics—combines patient stories with what he learned during many years of serving as an expert in national drug litigation to reveal the tangled web of financial interests at the heart of the dysfunction in our health-care system. For example, one of pharma’s best-kept secrets is that the peer reviewers charged with ensuring the accuracy and completeness of the clinical trial reports published in medical journals do not even have access to complete data and must rely on manufacturer-influenced summaries. Likewise for the experts who write the clinical practice guidelines that define our standards of care.

The result of years of research and privileged access to the inner workings of the U.S. medical-industrial complex, Sickening shines a light on the dark underbelly of American health care—and presents a path toward genuine reform.

Dr. JOHN ABRAMSON has been on the faculty of Harvard Medical School for twenty-five years, where he teaches health care policy.  He also served as a family physician for 22 years, during which he was named a “top doctor” six times in local, state, and national surveys. He served as an unpaid consultant to the FBI and Department of Justice, including in a case that resulted in the largest criminal fine in U.S. history. In addition to many academic articles and op-eds in the New York Times and other publications, he is the author of Overdo$ed America: The Broken Promise of American Medicine. Dr. Abramson has appeared on Today, CNN's American Morning, NPR's All Things Considered, CBS Evening News, NBC Nightly News, The Dr. Oz Show, and elsewhere. He lives near Boston.

"Abramson provides a detailed, accessible cost-benefit analysis of more than a dozen [brand-name drugs] . . . to make a compelling case that drug companies have created a chasm between 'their claimed or implied value and their true value.' . . . His recommendations should command the attention of every American.” — Psychology Today

“The Purdue Pharmaceutical company and its owners, the Sackler Family, have paid out billions of dollars in legal settlements, after deploying sales personnel to mislead physicians into believing that Oxycontin was not an addictive opioid. As John Abramson brilliantly shows in Sickening, the Purdue gang was simply following a script used by drug companies generally, hyping medicines and deceiving physicians about every aspect of their safety and efficacy. It’s a medical horror show.” — Laurie Garrett, winner of the Pulitzer Prize and New York Times bestselling author

“Powerful … Abramson proposes worthy long-term solutions … But this book, the best on prescription drugs since Katherine Eban’s Bottle of Lies, should also have high short-term value for patients, whom it might embolden to question their doctors more aggressively about whether there’s an equally effective substitute for a drug with a sky-high price tag. A blistering, persuasive critique of the harms done when drug companies hide the truth about their drugs.”
— Kirkus Reviews (starred review)

"Abramson… has compiled multiple patient stories to demonstrate how the pharmaceutical industry’s financial interests have corrupted and diminished the American health care system, costing not only many Americans their entire bank accounts but also, for many, their lives." — Fortune

“Dr. Abramson’s book is a scholarly tour de force that should be read by all prescribers, researchers, publishers of that research, and users of pharmaceutical drugs.” — Catherine DeAngelis, Editor in Chief Emerita, Journal of the American Medical Association

"A crash course in the profit-driven systems built by Big Pharma that dominate the U.S. health care industry and how they can cause undue suffering.... Sickening is written in tempered language backed up by hard data and historical examples to illustrate Big Pharma’s enrichment strategies."
— Undark Magazine

"Abramson shines a light on the questionable and unchallenged practices of drug companies that guarantee immense profits at the expense of misleading physicians about drug efficacy." — Library Journal

“Sickening is a must-read for all health professionals and anybody impacted by prescription drugs—that is, all of us. The book rigorously and convincingly documents that Big Pharma is largely responsible for the horrendously expensive yet inferior health care in the United States. To improve Americans’ health, a large proportion of the US population must read the book and incrementally reverse this travesty. When that happens, it will improve the health of the rest of the world as well.”— — James M. Wright, MD, PhD, Emeritus Professor, University of British Columbia

"Over many years of working with John Abramson in pharmaceutical and device litigation, I witnessed his unique blend of compassion for patients, deep medical knowledge, and unyielding intellectual integrity. He provided invaluable expertise on how manufacturers distort medical science, and he exposed the tactics used by manufacturers to mislead both doctors and the public. Now he brings those skills to this masterful and profound book, which exposes the routine dishonesty at the heart of the American health care crisis." — Clinton Fisher, JD, Simmons Hanly Conroy (retired)