Sink or Swim: A Novel of WWII (Hardcover) 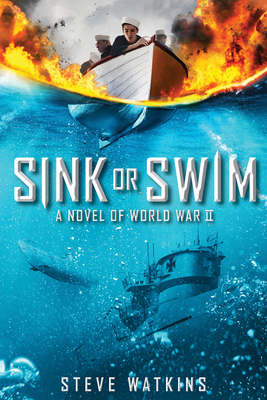 It's been a month since the bombing of Pearl Harbor. America is officially at war with Germany and Japan, and everyone wants to do their part. In twelve-year-old Colton's case, that means stepping up at home once his older brother, Danny, ships out with the navy. But before Danny leaves for boot camp, the brothers are fishing on the Atlantic Ocean when Danny's boat is capsized by a Nazi U-boat, nearly killing him.

When more U-boats start attacking the next day, Colton realizes just how close the enemy is to American shores. With Danny's life in the balance, Colton does the only thing he can think of to help his family and his country: He steals his brother's enlisting papers and joins up instead.

Colton's bold decision leads to a deadly journey. Even if he can keep his age a secret and survive boot camp, he'll have to face Hitler's ruthless submarines. But the longer he's on the seas, the less sure Colton is that he and his shipmates can stop such a relentless enemy . . .

Steve Watkins is the author of the novels On Blood Road;Juvie; What Comes After; Great Falls; Sink or Swim; Down Sand Mountain, winner of the Golden Kite Award; and the Ghosts of War series, including The Secret of Midway, Lost at Khe Sanh, AWOL in North Africa, and Fallen in Fredericksburg.

A former professor of journalism, creative writing, and Vietnam War literature, Steve now runs a nonprofit yoga studio and works with an urban reforestation organization in his hometown of Fredericksburg, Virginia.

"This captivating, don't-want-to-put-it-down story of Colton's journey will keep the reader on the edge of his or her seat, just waiting to see what happens next." -School Library Connection

Praise for Ghosts of War, The Secret of Midway
"Watkins does a fine job of weaving realistic and historical fiction elements with a good old-fashioned ghost story."-School Library Journal

"The supernatural and sleuthing story components make for a lively history lesson and should foster an interesting discussion around the Battle of Midway, as well as aspects of war frequently forgotten with time." -Booklist

"This would be a great supplement to a unit on the war in the Pacific." -School Library Connection