Rebel of Fire and Flight (Hardcover) 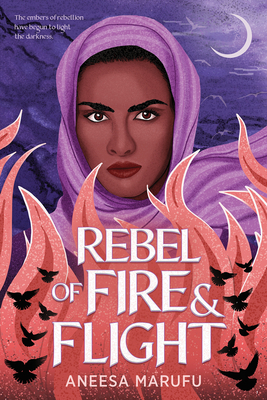 Rebel of Fire and Flight (Hardcover)


Usually Ships in 1-5 Days
This is the story of sixteen-year-old Khadija, who flees her home in a stolen hot air balloon to escape life in an arranged marriage. A deeply relevant, commercial fantasy adventure by an enthralling new talent, exploring prejudice, the deep roots of hatred, and the reality of the world that this heroine hopes to save.

Khadija loves the ancient tales of jinn and renegade princesses… but real life is closing in and her destiny as a ghadæan girl is marriage and boredom. When her father arranges a match, Khadija leaps at the chance of escape – a rogue hot air balloon fighting its ropes for the sky. Soon, Khadija is flying over the desert sands, away from everything she knows.Khadija finds an unlikely ally in a poor young glassmaker’s apprentice, Jacob.

But soon, a deadly revolution threatens their friendship and their world. The oppressed, pale-skinned hāri are restless – their infamous terrorist group, the Hāreef, have a new, fearsome leader. And the ruling ghadæans are brutal in their repression. As the Hāreef exploit forbidden magic – summoning jinn to aid their fight – Jacob and Khadija must choose what kind of a world they want to live in and how to make it a reality.

Aneesa Marufu lives in Manchester and was the winner of the Kimberley Chambers Kickstart Prize for underrepresented writers in 2019. Her debut novel is inspired by her South Asian heritage and her obsession with hot air balloons, though she is yet to fly in one!

When she isn’t dreaming up stories set in the clouds, she has both feet on the ground, running after her two children or hunting for her next fantasy book to escape into.

"Jacob’s and Khadija’s friendship and beliefs are painfully tested as they are thrust into a war involving forbidden magic, flesh-eating jinn, and powerful shaitan, or demonic spirits...a magical and insurgent high adventure." -- Kirkus Reviews