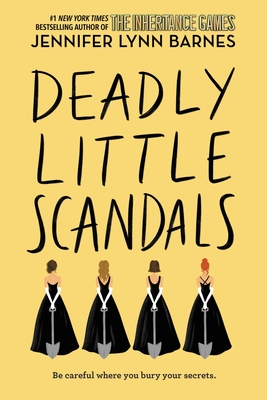 This is book number 2 in the Debutantes series.

No one is quite who they seem to be in the twisty, soapy, gasp-inducing world of the Debutantes by Jennifer Lynn Barnes, #1 bestselling author of The Inheritance Games.   Think of the White Gloves like the Junior League -- by way of Skull and Bones. Reluctant debutante Sawyer Taft joined Southern high society for one reason and one reason alone: to identify and locate her biological father. But the answers Sawyer found during her debutante year only left her with more questions and one potentially life-ruining secret. When her cousin Lily ropes her into pledging a mysterious, elite, and all-female secret society called the White Gloves, Sawyer soon discovers that someone in the group's ranks may have the answers she's looking for. Things are looking up . . . until Sawyer and the White Gloves make a disturbing discovery near the family's summer home -- and uncover a twisted secret, decades in the making.
Jennifer Lynn Barnes has written more than a dozen acclaimed young-adult novels, including The Naturals series and The Inheritance Games. A former debutante herself, she is a Fulbright Scholar with advanced degrees in psychology, psychiatry, and cognitive science who received her Ph.D. from Yale University in 2012. She is currently a professor of psychology and professional writing at the University of Oklahoma. She invites you to visit her online at www.jenniferlynnbarnes.com or follow her on Twitter @jenlynnbarnes.
Praise for Deadly Little Scandals:
"A focus on sisterhood and more than a few whiplash-inducing twists propel this smart and scandalous tale."—Kirkus Reviews

Praise for Little White Lies:
"Little White Lies is a comedy of manners and a blackmail thriller tied together with a perfect silk bow. A plot twist every twenty pages and characters as devious as they are southern-belle glamorous--Barnes is at her page-turning best."—E. Lockhart, author of We Were Liars and Genuine Fraud

"Fans of the nonstop intrigue of the Pretty Little Liars series will devour this glamorous, family-focused mystery that's led by a whip-smart, tough-as-nails heroine."—Booklist

"One thing is certain: Nothing, and no one, is what it seems....Sawyer's smart narrative, along with plenty of biting social commentary, will keep readers turning the pages."—Kirkus Reviews