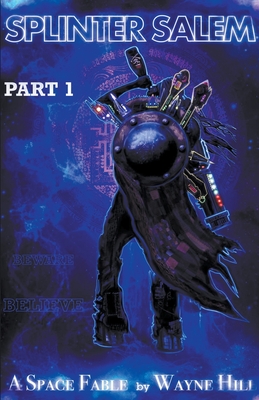 What if the worst version of you is exactly what the world needs?

The epic Space Fable Splinter Salem is a story of love and loss, life and death, of redemption and copious amounts of space grog.
With inspiration from Douglas Adams, Hunter.S.Thompson, Terry Pratchett, Clive Barker and Stephen King. Splinter Salem is currently a three part series, with much more planned for the future.
Think Starship Troopers meets Alice in Wonderland.
Each novella- sized part consists of 11 stunning artworks. Just under 200 pages in part one.
Why not raise a Bucky beer and join the Space Fable revolution?

This first instalment of unreal adventure has just washed ashore. Why not uncork and take a glug - with your eyes- it'll probably be better than the last few books you have flicked through mournfully whilst pondering the futility of life. Splinter Salem is the vodka enema Science Fiction never asked for, but desperately wanted, and paid for. So prepair a few crates, find a spittoon. If you can't find a spitoonjust use some old vase you dislike- I doubt anyone will mind if they don't know- and dive into an adventure like no other.

Welcome to the Space Fable revolution