Blood and Thunder: The Epic Story of Kit Carson and the Conquest of the American West (Paperback) 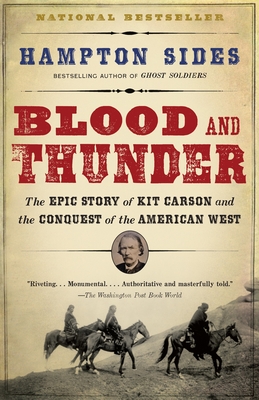 Blood and Thunder: The Epic Story of Kit Carson and the Conquest of the American West (Paperback)

NATIONAL BESTSELLER  • From the author of Ghost Soldiers comes a magnificent history of the American conquest of the West—"a story full of authority and color, truth and prophecy" (The New York Times Book Review).

In the summer of 1846, the Army of the West marched through Santa Fe, en route to invade and occupy the Western territories claimed by Mexico. Fueled by the new ideology of “Manifest Destiny,” this land grab would lead to a decades-long battle between the United States and the Navajos, the fiercely resistant rulers of a huge swath of mountainous desert wilderness.

At the center of this sweeping tale is Kit Carson, the trapper, scout, and soldier whose adventures made him a legend. Sides shows us how this illiterate mountain man understood and respected the Western tribes better than any other American, yet willingly followed orders that would ultimately devastate the Navajo nation. Rich in detail and spanning more than three decades, this is an essential addition to our understanding of how the West was really won.

A native of Memphis, Hampton Sides is editor-atlarge for Outside magazine and the author of the international best-seller, Ghost Soldiers (Doubleday), which was the basis for the 2005 Miramax film, The Great Raid. Ghost Soldiers won the 2002 PEN USA award for non-fiction and the 2002 Discover Award from Barnes & Noble, and his magazine work has been twice nominated for National Magazine Awards for feature writing. Hampton is also the author of Americana (Anchor) and Stomping Grounds (William Morrow). A graduate of Yale with a B.A. in history, he lives in New Mexico with his wife, Anne, and their three sons.
“Riveting . . . monumental . .. . Not only does Blood and Thunder capture a pivotal moment in U.S. history in marvelous detail, it is also authoritative and masterfully told.” —The Washington Post Book World“Stunning. . . Both haunting and lyrical, Blood and Thunder is truly a masterpiece.” —Los Angeles Times“We see a panorama and a whole history, intricately laced with wonder and meaning, coalesce into a story of epic proportions, a story full of authority and color, truth and prophecy . . . Sides fills a conspicuous void in the history of the American West.” —N. Scott Momaday, The New York Times Book Review“From the lean crisp descriptions of the characters to the sights, sounds and smells of the trail, this is a crystal clear picture of the West.” —San Antonio Express News