The Anatomy of Fascism (Paperback) 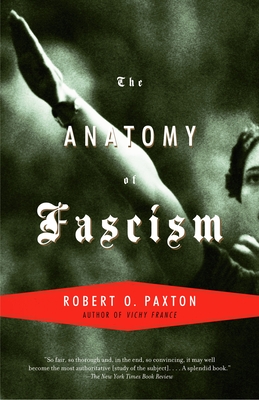 What is fascism? By focusing on the concrete: what the fascists did, rather than what they said, the esteemed historian Robert O. Paxton answers this question.

From the first violent uniformed bands beating up “enemies of the state,” through Mussolini’s rise to power, to Germany’s fascist radicalization in World War II, Paxton shows clearly why fascists came to power in some countries and not others, and explores whether fascism could exist outside the early-twentieth-century European setting in which it emerged.

"A deeply intelligent and very readable book. . . . Historical analysis at its best." –The Economist

The Anatomy of Fascism will have a lasting impact on our understanding of modern European history, just as Paxton’s classic Vichy France redefined our vision of World War II. Based on a lifetime of research, this compelling and important book transforms our knowledge of fascism–“the major political innovation of the twentieth century, and the source of much of its pain.”

Robert O. Paxton taught at Columbia University. His other books include Vichy France, Vichy France and the Jews (with Michael Marrus), Europe in the Twentieth Century, and French Peasant Fascism. He lives in New York City.

"So fair, so thorough and, in the end, so convincing, it may well become the most authoritative . . . study of the subject. . . . A splendid book." –The New York Times Book Review

"Useful and timely. . . . Mussolini and Hitler were the prototypical fascist leaders, and Paxton chronicles their rise to power--and their global influence and ultimate fall--with a brilliant economy." –San Francisco Chronicle

"A deeply intelligent and very readable book. . . . Historical analysis at its best." –The Economist

“[A] helpful contribution, thoughtfully mapping out the descent of a civilized people — first the Italians, then the Germans — into a primal state (and state of being) ruled by mythology, symbol and emotion. . . . Serves as a reminder of our power and responsibility.” –The Washington Post Book World

“Until now there has been no satisfying account of fascism that includes a convincing diagnostic kit for identifying its symptoms. . . . Robert Paxton steps in to restore sanity, with his view that fascism is not what was believed but what was done.” –Los Angeles Times Book Review