Nixon and Mao: The Week That Changed the World (Hardcover) 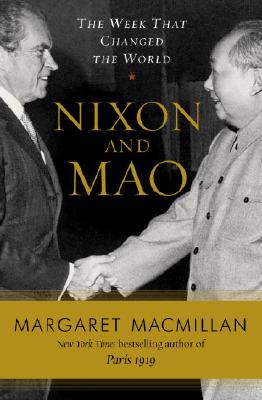 By Margaret Macmillan
$27.95
Email or call for price.

With the publication of her landmark bestseller Paris 1919, Margaret MacMillan was praised as “a superb writer who can bring history to life” (The Philadelphia Inquirer). Now she brings her extraordinary gifts to one of the most important subjects today–the relationship between the United States and China–and one of the most significant moments in modern history. In February 1972, Richard Nixon, the first American president ever to visit China, and Mao Tse-tung, the enigmatic Communist dictator, met for an hour in Beijing. Their meeting changed the course of history and ultimately laid the groundwork for the complex relationship between China and the United States that we see today.

That monumental meeting in 1972–during what Nixon called “the week that changed the world”–could have been brought about only by powerful leaders: Nixon himself, a great strategist and a flawed human being, and Mao, willful and ruthless. They were assisted by two brilliant and complex statesmen, Henry Kissinger and Chou En-lai. Surrounding them were fascinating people with unusual roles to play, including the enormously disciplined and unhappy Pat Nixon and a small-time Shanghai actress turned monstrous empress, Jiang Qing. And behind all of them lay the complex history of two countries, two great and equally confident civilizations: China, ancient and contemptuous yet fearful of barbarians beyond the Middle Kingdom, and the United States, forward-looking and confident, seeing itself as the beacon for the world.

Nixon thought China could help him get out of Vietnam. Mao needed American technology and expertise to repair the damage of the Cultural Revolution. Both men wanted an ally against an aggressive Soviet Union. Did they get what they wanted? Did Mao betray his own revolutionary ideals? How did the people of China react to this apparent change in attitude toward the imperialist Americans? Did Nixon make a mistake in coming to China as a supplicant? And what has been the impact of the visit on the United States ever since?

Weaving together fascinating anecdotes and insights, an understanding of Chinese and American history, and the momentous events of an extraordinary time, this brilliantly written book looks at one of the transformative moments of the twentieth century and casts new light on a key relationship for the world of the twenty-first century.


Margaret MacMillan is the author of Women of the Raj and Paris 1919: Six Months That Changed the World, which won the Duff Cooper Prize, the Samuel Johnson Prize for Non-Fiction, the Hessell-Tiltman Prize for History, a Silver Medal for the Arthur Ross Book Award of the Council on Foreign Relations, and the Governor General’s Literary Award for nonfiction. It was selected by the editors of The New York Times as one of the best books of 2002. Currently the provost of Trinity College and a professor of history at the University of Toronto, MacMillan takes up the position of warden of St. Antony’s College, Oxford, in July 2007. She is an officer of the Order of Canada, a fellow of the Royal Society of Literature, and a senior fellow of Massey College at the University of Toronto.