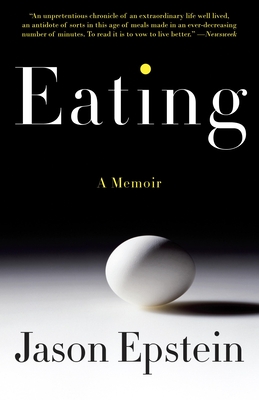 “Lovers of such writers as M.F.K. Fisher and Elizabeth David will adore this marvelous, dishy book about the world of publishing in its heyday, when lunches were long and leisurely, the drinks were stiff, and everybody knew everybody. Epstein was not just a power in the book business, he's also a fantastic cook and raconteur. You'll enjoy every delectable minute of reading Eating.”
— Kathy Ashton, The King's English, Salt Lake City, UT

This delicious memoir celebrates a lifetime of pleasure in cooking and eating well, taking us on a culinary tour of the life of the legendary editor of such great chefs and bakers as Alice Waters and Wolfgang Puck and publisher of Norman Mailer and Vladimir Nabokov

“A cornucopia of memories—some personal, some literary, all tied to food—and as many interesting recipes as ruminations.” —The Wall Street Journal

From the great restaurants of postwar Paris to the narrow streets of New York’s Chinatown today; from a New Year’s dinner aboard the old Ile de France with Buster Keaton to an evening at New York’s glamorous “21” restaurant with the dreaded Roy Cohn; from Chinese omelettes with the great Jane Jacobs at the edge of the Arctic Ocean to a lobster dinner with the Mailers on Cape Cod, this delicious book celebrates a lifetime of pleasure in cooking and eating well.

JASON EPSTEIN is the recipient of many awards, including the National Book Award for Distinguished Service to American Letters. For many years he was editorial director of Random House. He is the author of Book Business: Publishing Past, Present, and Future. He died in 2022.

“Eating is an unpretentious chronicle of an extraordinary life well lived, an antidote of sorts in this age of . . . meals made in an ever-decreasing number of minutes. To read it is to vow to live better.” —Newsweek

“Full of anecdotes and his gusto for food and life . . .  Epstein has produced a book that will warm readers’ hearts.” —The Washington Times

“[Epstein] treats us to a cornucopia of memories—some personal, some literary, all tied to food—and as many interesting recipes as ruminations. . . . A delight.” —The Wall Street Journal

“Delicious. . . . [Epstein] has been present for (or hosted) some of the greatest, most unhinged literary dinner parties of our time.” —The New York Times

“This convivial memoir by a distinguished publisher charts a lifetime of cooking and consumption. . . . Enlivening.” —The New Yorker

“What a storyteller! He brings food into the cultural experience in a beautiful way.” —Alice Waters

“The conversational recipes and fond descriptions carry a clear intimation of how one should really live, the very thing that is so compelling in M. F. K. Fisher and Julia Child.” —James Salter, coauthor of Life Is Meals

“As Proust demonstrated with his madeleine, taste is a powerful unleasher of memories. Epstein’s book, like M.F.K. Fisher’s The Art of Eating, Laurie Colwin’s Home Cooking and, more recently, Amanda Hesser’s Cooking for Mr. Latte, tucks recipes into an entertaining, alternately informative and autobiographical narrative. . . . Eating . . . works for armchair cooks as well as active chefs, and has the advantage of being calorie-free.” —San Francisco Chronicle

“You’ll want to gobble this slender volume in a single sitting. Go ahead—a little Eating is good for you.” —The Free Lance-Star

“Only a great editor could think up a new way to write a recipe. Jason Epstein’s cookbook is really a short-story collection, in which the main character, Mr. Epstein, gets on with his life among writers and other hungry people of uncommon interest by cooking for them. It’s all a seamless narrative, the tales of Epstein, in an apron at the gates of literature.” —Raymond Sokolov, author of The Saucier’s Apprentice

“Eating is a lovely read which I find made me hungry.” —Larry McMurtry, author of Lonesome Dove

“He writes with the voice and wisdom of a true cook. I love the connected way in which he understands the dialogue between ingredients, the process of cooking, and the conversation with the self. And of course I love the way in which he so clearly demonstrates that the practice of good cooking is really the practice of good living.” —Scott Peacock, coauthor of The Gift of Southern Cooking