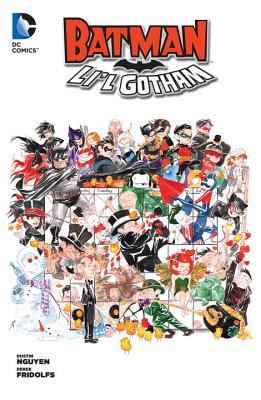 These gorgeously drawn and painted all-ages tales feature all of your favorite Gotham City characters: Batman, Robin, Nightwing, Catwoman, The Joker, The Penguin and many others!

First up, Robin needs Batman's help to learn the true meaning of Halloween. Then, on Thanksgiving, Batman and Robin join the families of Gotham City around the table for a holiday feast--and birds of a feather flock together to stage a march against the city...led by The Penguin!  As Christmas time approaches, the search for a missing holiday choir leads Batman and Nightwing into a confrontation with Mr. Freeze! But in this heartfelt Christmas tale, the frozen fiend's motives aren't as nefarious as they seem...
And on a festive New Year's Eve, Catwoman thinks she'll be spending a quiet night at home, contemplating her New Year's resolutions--until Poison Ivy and Harley Quinn show up, that is!

Derek Fridolfs broke into comics at the same time as Dustin Nguyen, and has collaborated with him on such titles as GEN ACTIVE, JET, THE AUTHORITY, SUPERMAN/BATMAN and now DETECTIVE COMICS. In addition, he has contributed work to a wide variety of other titles, including Wolverine, Spider-Man, The Fantastic Four, Kiss, Buffy the Vampire Slayer, Emily the Strange and Teenage Mutant Ninja Turtles, as well as writing stories for Western Tales of Terror, Trailer Park of Terror, the Comic Book Legal Defense Fund's More Fund anthology and an upcoming volume of the Image anthology title Popgun. Fridolfs has also worked with the Fresno County and Kern County libraries, teaching seminars on comics for fans of all ages. He lives in Fresno, California.