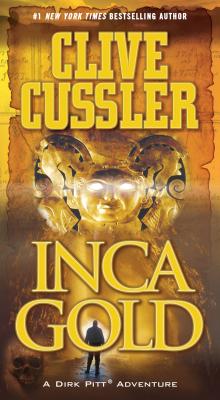 A classic, thrilling Dirk Pitt adventure from a master of the genre!

Nearly five centuries ago a fleet of boats landed mysteriously on an island in an inland sea. There, an ancient Andean people hid a golden hoard greater than that of any pharaoh, then they and their treasure vanished into history—until now.

In 1998, in the Andes Mountains of Peru, Dirk Pitt dives into an ancient sacrificial pool, saving two American archaeologists from certain drowning. But his death-defying rescue is only the beginning, as it draws the intrepid Pitt into a vortex of darkness and danger, corruption and betrayal. A sinister crime syndicate has traced the long-lost treasure—worth almost a billion dollars—from the Andes to the banks of a hidden underground river flowing beneath a Mexican desert. Driven by burning greed and a ruthless bloodlust, the syndicate is racing to seize the golden prize...and to terminate the one man who can stop them.

Clive Cussler (1931–2020) was the author or coauthor of over eighty books in five bestselling series, including DIRK PITT®, THE NUMA FILES®, THE OREGON FILES ®, AN ISAAC BELL ADVENTURE ®, A SAM AND REMI FARGO ADVENTURE ®, and A KURT AUSTIN ADVENTURE ®. His nonfiction works include Built for Adventure: The Classic Automobiles of Clive Cussler and Dirk Pitt, Built to Thrill: More Classic Automobiles from Clive Cussler and Dirk Pitt, The Sea Hunters, and The Sea Hunters II; these describe the true adventures of the real NUMA, which, led by Cussler, searches for lost ships of historic significance. With his crew of volunteers, Cussler discovered more than sixty ships, including the long-lost Civil War submarine Hunley.

Stephen Coonts Nobody does it better than Clive Cussler. Nobody!