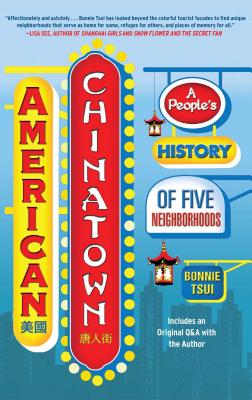 The mystery of Chinatown as foreign yet familiar has been long established in the American imagination. Visitors come to expect this, looking for “something different” in its narrow lanes and fish markets. They can taste a world apart, listen to a foreign language, and try to barter for a trinket on the street—without ever leaving the country. And then they go home, sometimes just a few streets away, and get on with the everyday. What is truly under the radar is what they don’t see: a unique community getting on with its own everyday.

In American Chinatown, Bonnie Tsui takes an affectionate and awestruck look at the bustling part of town that has bewitched her ever since she was a child, when she would eagerly await her grandfather’s return from the fortune cookie factory. By interweaving her own personal impressions with the experiences of those living in Chinatowns all across the United States today, Tsui beautifully captures its vivid stories, giving readers a deeper look into what “Chinatown” means to its inhabitants—and to America at large.

Bonnie Tsui is a longtime contributor to The New York Times and California Sunday Magazine. She has been the recipient of the Jane Rainie Opel Young Alumna Award from Harvard University, the Lowell Thomas Gold Award, and a National Press Foundation Fellowship. American Chinatown: A People’s History of Five Neighborhoods, won the Asian/Pacific American Award for Literature and was a San Francisco Chronicle bestseller and Best of 2009 Notable Bay Area Books selection. Her website is BonnieTsui.com.

"A wonderfully revealing and compassionate trip into the real lives of men and women who straddle the world's two great powers. The graceful travelogue is from a hidden world in our own backyards. Tsui plunges into Chinatowns that are, like China itself, reinventing themselves before our eyes, showing not only what it means to be Chinese in the world, but also the spirit of self-invention that made America great." -- Evan Osnos, Beijing Correspondent, The New Yorker

"A fascinating and thoughtful look at a thoroughly American phenomenon." -- Gish Jen, Author of The Love Wife

"In this masterful work, Bonnie Tsui charts the fascinating history of America's Chinatowns. From geography to economics to linguistics, she presents a vibrant, intimate portrait of communities that have played a crucial role in shaping the American landscape. There are dozens of evocative, exhilarating, and touching stories here, from those of a beauty queen to a Vegas poker dealer in training. Candid, witty, and always engaging, Tsui is a wonderful guide for these many journeys." -- Sara Houghteling, Author of Pictures At An Exhibition

"Bonnie Tsui has written affectionately and astutely about a subject very close to my heart: Chinatown. In speaking with old-timers, the first generation to grow up in Chinatown, and the newest immigrants, she has captured the ways that five Chinatowns connect their inhabitants to culture, history, language, food, and to China itself -- even if they've never been there. She has looked beyond the colorful tourist facades to find unique neighborhoods that serve as home for some, refuges for others, and places of memory for all." -- Lisa See, Author of Shanghai Girls and Snow Flower and the Secret Fan

"An intimate glimpse into Chinatown...Tsui details fascinating facts about the history of each Chinatown, while also delving into how each has influenced their cities at large. But the book works so well because Tsui captures the essence of each Chinatown by telling the stories of its people." -- Ann Tatko-Peterson, Contra Costa Times