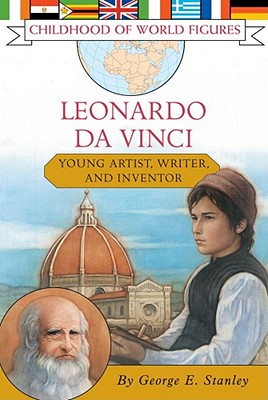 Leonardo Da Vinci is best known as the Renaissance painter who created the Mona Lisa and The Last Supper. he also made great contributions as a sculptor, architect, engineer. and scientist. But Leonardo wasn't always famous. Leonardo grew up in Vinci, a small town in Italy, and when he was only a few years old he was separated from his mother and sent to live with his grandparents and uncle Francesco. Although Leonardo only receiced a formal education for a few years, Francesco taught Leonardo about nature. Leonardo loved to sketch the world around him.
When he was a teenager, Leonardo moved to the city of Florence. It was here that his artistic talent was recognized and he became and apprentice to a famous artist. Leonardo worked hard at his trade and advanced quickly, but he wasn't interested in only art. To fuel his curiosity, he also studied science, mathematics, engineering and philosophy.
Read about the little boy from Vinci who became one of the most facscinating figures in world history.

George Stanley was a Professor of African and Middle-Eastern Languages and Linguistics at Cameron University. In between prepping class lectures and grading papers, he found the time to write for children. He was also the author of Night Fires and the Third-Grade Detectives series.