The Tortoise or the Hare (Paperback) 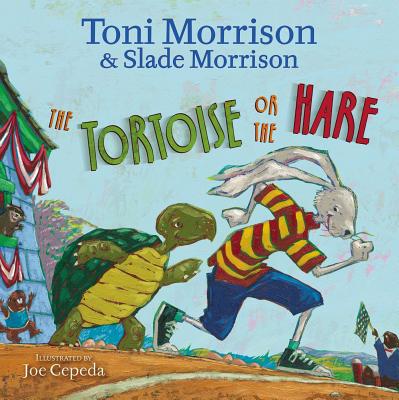 In the well-known tale of “The Tortoise and the Hare,” everyone remembers that “slow and steady wins the race”—or does it? In this energetic retelling of a favorite fable, it’s the speedy Hare who crosses the finish line first, but it’s Tortoise who has the tale to tell when he discovers that the race, not the winning, is what matters most. While winning is important, isn’t making a true friend the best prize of all?

Toni Morrison (1931–2019) was a Nobel Prize–winning American author, editor, and professor. Her contributions to the modern canon are numerous. Some of her acclaimed titles include: The Bluest Eye, Song of Solomon, and Beloved, which won the Pulitzer Prize for Fiction in 1988. She won the Nobel Prize for Literature 1993.

Slade Morrison was born in Ohio and educated in New York City. He studied art at SUNY Purchase and collaborated with his mother, Toni Morrison, on five books for children.

Joe Cepeda is the illustrator of many award-winning picture books, including Peeny Butter Fudge and The Tortoise or the Hare by Toni Morrison and Slade Morrison, What a Truly Cool World by Julius Lester, Mice and Beans by Pam Muñoz Ryan, and Gracias the Thanksgiving Turkey by Joy Cowley. Mr. Cepeda received his BFA in illustration from California State University, Long Beach. His illustrations have appeared in publications such as the Los Angeles Times; Buzz, Inc. Magazine; and Latina Magazine.