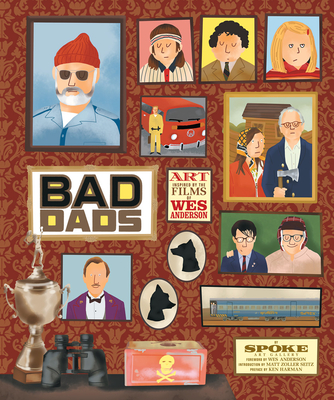 The third volume in the New York Times bestselling Wes Anderson Collection series showcases the best artwork from “Bad Dads,” an annual exhibition of art inspired by the films of Wes Anderson.

Curated by Spoke Art Gallery in San Francisco, “Bad Dads” has continued to grow and progress as a dynamic group exhibition since its inaugural show in 2011, and has featured work from more than 400 artists from around the world. Those artworks range from paintings to sculptures to limited-edition screen prints and vary greatly in style, making for a diverse and lively show each year. Though each piece is distinct in its own right, the artworks’ unifying element is the shared imagery and beloved characters from:

The book features an original cover by graphic artist Max Dalton, a foreword by writer and director Wes Anderson himself, and an introduction by TV and movie critic Matt Zoller Seitz, author of the bestselling Wes Anderson Collection books.

Spoke Art is a San Francisco–based gallery, run by Ken Harman, that specializes in new contemporary painting, sculpture, and illustration. They curate a series of rotating monthly exhibits that feature a wide variety of solo and group shows.