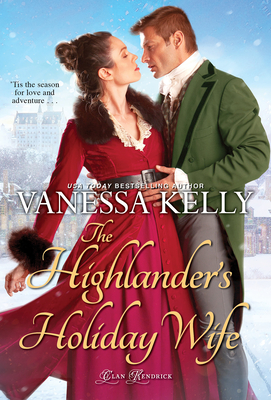 This is book number 5 in the Clan Kendrick series.

Meet the most level-headed of the Clan Kendrick brothers  and the independent woman who steals his heart in the fifth installment of USA Today bestselling author Vanessa Kelly’s intoxicating series set in Regency Scotland...

It’s Christmastime in Edinburgh, but Lady Samantha Penwith’s secret mission takes no holiday: the Highlands-born lass vows to find the assailants who murdered her beloved husband, founder of a charitable school for orphaned boys. On her latest undercover excursion, she closes in on a pair of armed attackers and interrupts another assault, then disappears into the darkness, leaving the lone victim mystified—and lucky to be alive . . .

Braden Kendrick may be the sensible brother, yet the dedicated doctor routinely ignores the dangers of his late-night calls to the city’s slums. But when a fleet-footed rescuer saves his life, he’s determined to uncover the stranger’s identity. And once he does, he’ll find himself facing his own past loss for the first time—and more than willing to risk his heart again, just in time to make the Clan Kendrick’s Christmas celebrations more festive than ever . . .
Vanessa Kelly is the award-winning and USA Today bestselling author of The Improper Princesses series, the Clan Kendrick, The Renegade Royals and The Stanton Family series, in addition to other historical romances. Named by Booklist as one of the "Stars of Historical Romance," her books have been translated into nine languages and published internationally. In graduate school, Vanessa specialized in the study of eighteenth-century British fiction and is known for developing vibrant Regency settings, appealing characters, and witty story lines that captivate readers. She lives with her husband in Ottawa. Visit her at VanessaKellyAuthor.com or join the Clan Kendrick Facebook Group at Facebook.com/groups/ClanKendrick.