Wearing Red, Tracking Reds: What a Ride!: Policing and Counter-Espionage from Canada to Hong Kong (Hardcover) 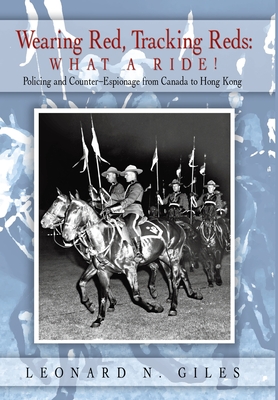 Wearing Red, Tracking Reds: What a Ride!: Policing and Counter-Espionage from Canada to Hong Kong (Hardcover)

Entering the Royal Canadian Mounted Police in 1960 with visions of rural police duties, highway patrol or perhaps plain clothes detective work, I ended up in an unanticipated place, completely foreign to my expectations.

In 1964, I was inducted into the obscure and secretive world of subversion and counter-espionage investigations. One of the first books I was instructed to read was: The Theory and Practice of Communism, hardly the stuff I was interested in. I didn't know much about the Security and Intelligence Branch and I had a lot to learn about Communists, the Reds, Lenin's Lads or whatever they called them. Previously, my closest encounter with anything related to communism was the Cold War bomb shelter at my first Detachment; a Soviet diplomat, driving a Cadillac that I stopped for speeding; and, massive United States troop movements I observed in Los Angeles at the height of the 1962 Cuban Missile Crisis. That showdown between U.S. President John F. Kennedy and Soviet Premier Nikita Khrushchev was probably the closest the World has ever come to all-out nuclear war. That event and the ever-present threats posed by the Cold War convinced me I needed to get serious about the work I was about to embark upon.

This book covers the challenge of maintaining pace with the gathering storm of Chinese political and economic espionage, while at the same time coping with the organizational and individual stress of the McDonald Commission inquiries. It also speaks of the complexities of staffing, management responses during these trying times, of careers floundering and some flowering as the new Service, inundated with over-sight, new policies, procedures, restrictions and guidelines, tried to get its feet firmly on the ground. The stigma of "old wine in a new bottle" held sway in a climate of trying to move forward. Then the catastrophe of the 1985 Air India bombing--Canada's 911--complicated matters even further while C.S.I.S. was still in its infancy. The drama seems to be without end as the Phase II report of the Major Commission of Inquiry into the Investigation of the Bombing of Air India Flight 182 has--at the time of this publication--yet to be released.

This is a telling memoir of a career in policing, intelligence and counter-espionage in Canada and overseas; in Services in the midst of traumatic organizational change and stress, mixed with inexplicable management tactics and the pride of diplomatic service.