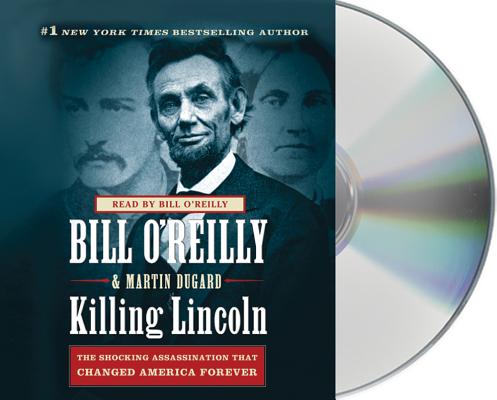 A riveting historical narrative of the heart-stopping events surrounding the assassination of Abraham Lincoln, and the first work of history from mega-bestselling author Bill O'Reilly

The iconic anchor of The O'Reilly Factor recounts one of the most dramatic stories in American history—how one gunshot changed the country forever. In the spring of 1865, the bloody saga of America's Civil War finally comes to an end after a series of increasingly harrowing battles. President Abraham Lincoln's generous terms for Robert E. Lee's surrender are devised to fulfill Lincoln's dream of healing a divided nation, with the former Confederates allowed to reintegrate into American society. But one man and his band of murderous accomplices, perhaps reaching into the highest ranks of the U.S. government, are not appeased.

In the midst of the patriotic celebrations in Washington D.C., John Wilkes Booth—charismatic ladies' man and impenitent racist—murders Abraham Lincoln at Ford's Theatre. A furious manhunt ensues and Booth immediately becomes the country's most wanted fugitive. Lafayette C. Baker, a smart but shifty New York detective and former Union spy, unravels the string of clues leading to Booth, while federal forces track his accomplices. The thrilling chase ends in a fiery shootout and a series of court-ordered executions—including that of the first woman ever executed by the U.S. government, Mary Surratt. Featuring some of history's most remarkable figures, vivid detail, and page-turning action, Killing Lincoln is history that reads like a thriller.

MARTIN DUGARD is the New York Times bestselling author of several books of history, among them the Killing series, Into Africa, and Taking Paris. He and his wife live in Southern California.

“Newsman O'Reilly...gives us a great dramatic reading. The book resonates like a novel, an adventure story...Pacing is everything; O'Reilly is good at it.” —AudioFile

“In this fast-paced, enthralling narrative that unfolds more like a true-crime thriller than scholarly analysis, O'Reilly and Dugard offer an account of the events that led up to, surrounded, and unfolded in the aftermath of Lincoln's assassination...O'Reilly's sonorous tone and flair for the dramatic add tremendously to the work's theatrical value.” —Library Journal, starred review

“This short audiobook is like a crash course on one of the pivotal moments in our nation's history...Bill O'Reilly, of The O'Reilly Factor, is an animated reader, as you might expect.” —Fort Worth Star-Telegram

“As a history major, I wish my required reading had been as well written as this truly vivid and emotionally engaging account of Lincoln's assassination. And as a former combat infantry officer, I found myself running for cover at the Civil War battle scenes. This is the story of an American tragedy that changed the course of history. If you think you know this story, you don't until you've read Killing Lincoln. Add historian to Bill O'Reilly's already impressive résumé.” —Nelson DeMille, author of The Lion and The Gold Coast

“Killing Lincoln is a must read historical thriller. Bill O'Reilly recounts the dramatic events of the spring of 1865 with such exhilarating immediacy that you will feel like you are walking the streets of Washington, DC, on the night that John Wilkes Booth shot Abraham Lincoln. This is a hugely entertaining, heart-stopping read.” —Vince Flynn, author of American Assassin

“If Grisham wrote a novel about April 1865…it might well read like Killing Lincoln.” —Peter J. Boyer, Newsweek