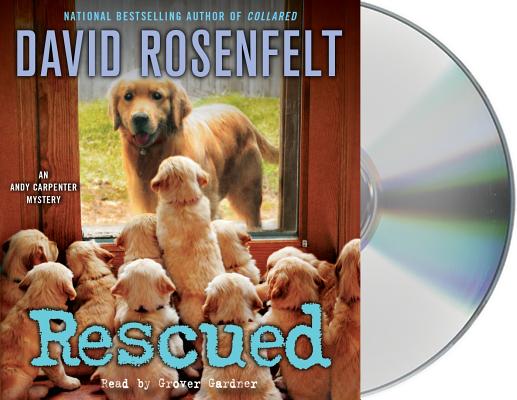 This is book number 17 in the An Andy Carpenter Novel series.

"Narrator Grover Gardner provides the perfect intonations for this audiobook...This audiobook is for anyone who likes mysteries--and dogs, of course." -- AudioFile Magazine

In Rescued, David Rosenfelt again delights listeners with the charm and wit they’ve come to expect. Even the most fervent fans of the sardonic Andy Carpenter and his team will be enthralled by this latest case, where the stakes have never been higher.

Defense lawyer Andy Carpenter is reluctant to take on any more cases. He’d much rather spend his time working for his dog rescue organization, the Tara Foundation, than find himself back in a courtroom. However, when a truck carrying over seventy dogs from the South to the rescue-friendly northeast turns up with a murdered driver, Andy can’t help but get involved.

Of course Andy is eager to help the dogs, many of whom come to the Tara Foundation while awaiting forever homes – it’s the man accused of murder who he has a problem defending. The accused just happens to be his wife Laurie’s ex-fiance; her tall, good looking, ex-Marine ex-fiance. Even though he acknowledges having argued with the victim, he swears that he is not a killer, and though he would rather not, Andy has to admit he believes he's telling the truth.

For Andy, even with dozens of successful cases behind him, this case that his wife insists he take may prove to be his most difficult.