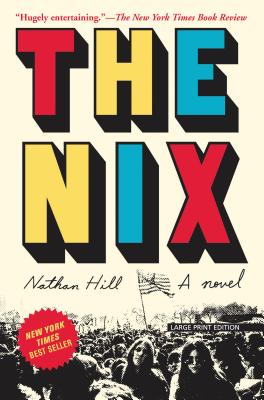 “Hill's debut is remarkable because it does both the little things and the big things right. It is an intimate novel of identity and loss, the story of a boy abandoned and the man now trying to recover. It also paints a vivid portrait of America and its politics from the 1960s to the present. The Nix overflows with unforgettable characters, but none more clearly rendered than Samuel Andersen-Anderson and his mother, Faye, both bewildered by life and struggling to repair the rift between them. From intimate whispers to American news cycles, this astounding novel of reclamation is guaranteed to sweep readers off their feet.”
— Luisa Smith (E), Book Passage, Corte Madera, CA

It's 2011, and Samuel Andresen-Anderson hasn't seen his mother Faye in decades--not since she abandoned the family when he was a boy. Now she's re-appeared, having committed an absurd crime that electrifies the nightly news and inflames a politically divided country. The media paints Faye as a radical hippie with a sordid past, but as far as Samuel knows, his mother was an ordinary girl who married her high-school sweetheart. Which version of his mother is true? Two facts are certain: she's facing some serious charges, and she needs Samuel's help.
To save her, Samuel will have to embark on his own journey, uncovering long-buried secrets about the woman he thought he knew, secrets that stretch across generations and have their origin all the way back in Norway, home of the mysterious Nix. As he does so, Samuel will confront not only Faye's losses but also his own lost love, and will relearn everything he thought he knew about his mother, and himself.

NATHAN HILL's short fiction has appeared in many literary journals, including The Iowa Review, AGNI, The Gettysburg Review, and Fiction, which awarded him its annual Fiction Prize. A native Iowan, he lives with his wife in Naples, Florida.