Autopsy of a Deceased Church: 12 Ways to Keep Yours Alive (Hardcover) 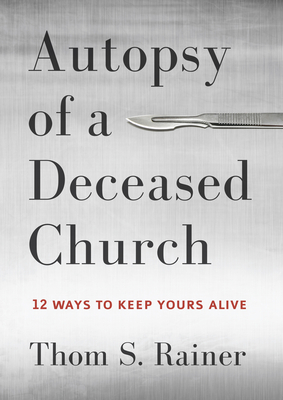 No one wants to see a church die. And yet, far too many churches are dying. For more than twenty-five years, Dr. Thom Rainer has helped churches grow, reverse the trends of decline, and has autopsied those that have died. From this experience, he has discovered twelve consistent themes among those churches that have died. Yet, it’s not gloom and doom because from those twelve themes, lessons on how to keep your church alive have emerged.

Whether your church is vibrant or dying, whether you are a pastor or a church member, Autopsy of a Deceased Church will walk you through the radical paths necessary to keep your church alive to the glory of God and advancement of Christ’s Kingdom!

Thom S. Rainer is the founder and CEO of Church Answers. Prior to Church Answers, he served as president and CEO of LifeWay Christian Resources. He also served at The Southern Baptist Theological Seminary for twelve years where he was the founding dean of the Billy Graham School of Missions and Evangelism. He has been a pastor of four churches and interim pastor of ten churches. He is a 1977 graduate of the University of Alabama and earned his Master of Divinity and Ph.D. degrees from The Southern Baptist Theological Seminary.

Rainer has written over 30 books, including three that reached number one bestseller: I Am a Church Member, Autopsy of a Deceased Church, and Simple Church.

He has spoken in hundreds of venues and led over 500 church consultations. He can be reached at www.ChurchAnswers.com.

Rainer and his wife, Nellie Jo, live in Franklin, TN, and have three grown sons: Sam, Art and Jess, who are married to Erin, Sarah and Rachel respectively. The Rainers have ten grandchildren: Canon, Maggie, Nathaniel, Will (with the Lord), Harper, Bren, Joshua, Collins, Joel, and James.