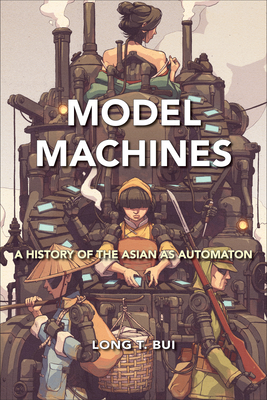 In the contemporary Western imagination, Asian people are frequently described as automatons, which disavows their humanity. In Model Machines, Long Bui investigates what he calls Asian roboticism or the ways Asians embody the machine and are given robotic characteristics.

Bui offers the first historical overview of the overlapping racialization of Asians and Asian Americans through their conflation with the robot-machine nexus. He puts forth the concept of the “model machine myth,” which holds specific queries about personhood, citizenship, labor, and rights in the transnational making of Asian/America.

The case studies in Model Machines chart the representation of Chinese laborers, Japanese soldiers, Asian sex workers, and other examples to show how Asians are reimagined to be model machines as a product of globalization, racism, and colonialism. Moreover, it offers examples of how artists and everyday people resisted that stereotype to consider different ways of being human. Starting from the early nineteenth century, the book ends in the present with the new millennium, where the resurgence of China presages the “rise of the machines” and all the doomsday scenarios this might spell for global humanity at large.

Long T. Bui is an Associate Professor at the University of California, Irvine and the author of Returns of War: South Vietnam and the Price of Refugee Memory.

“In this powerful and indispensable historiography, Long Bui puts to rest any lingering doubt about the pernicious pervasiveness of the model machine myth that has long cast Asians as technologized nonhumans in American cultural and economic histories. Through a meticulously researched catalog of the ways Asians have been instrumentalized via recalcitrant techno-Orientalist vocabularies, Bui provides rigorous analyses of the implications and damages of the myth as well as bold provocations for interventions and change.”—Betsy Huang, Associate Professor of English and Dean of the College at Clark University, and coeditor of Techno-Orientalism: Imagining Asia in Speculative Fiction, History, and Media

“Model Machines tracks how fantasies of race and machines inform one another, but also inform the coding of the Asian American race through global history. Looking at the long history of Asian American racial formation, beginning with early nineteenth-century Chinese ‘coolies’ figured as labor machines, through Southeast Asian women imagined as ‘sex machines’ during the Cold War, into the present era of increasing machine-human interactions, Bui creates a welcomed bridge between theories of human-machine relations and critical ethnic studies of the racialization of technology.”—Kalindi Vora, Professor of Gender, Sexuality, and Women’s Studies and Ethnicity, Race, and Migration at Yale University, and coauthor of Surrogate Humanity: Race, Robots, and the Politics of Technological Futures