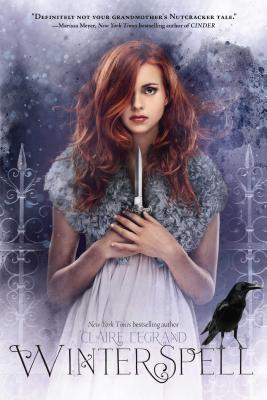 After her mother is brutally murdered, seventeen-year-old Clara Stole is determined to find out what happened to her. Her father, a powerful man with little integrity, is a notorious New York City gang lord in the syndicate-turned-empire called Concordia. And he isn’t much help.

But there is something even darker than Concordia’s corruption brewing under the surface of the city, something full of vengeance and magic, like the stories Clara’s godfather used to tell her when she was a little girl. Then her father is abducted and her little sister’s life is threatened, and Clara accidentally frees Nicholas from a statue that has been his prison for years. Nicholas is the rightful prince of Cane, a wintry kingdom that exists beyond the city Clara has known her whole life.

When Nicholas and Clara journey together to Cane to retrieve her father, Clara encounters Anise, the queen of the faeries, who has ousted the royal family in favor of her own totalitarian, anti-human regime. Clara finds that this new world is not as foreign as she feared, but time is running out for her family, and there is only so much magic can do...

New York Times bestselling author Marissa Meyer (Cinder) says “this is not your grandmother’s Nutcracker tale.”
Claire Legrand used to be a musician until she realized she couldn’t stop thinking about the stories in her head. Now Ms. Legrand is a full-time writer living in New Jersey. She has written two middle grade novels—The Cavendish Home for Boys and Girls, one of the New York Public Library’s 100 Titles for Reading and Sharing in 2012, and The Year of Shadows—as well as the young adult novel Winterspell. Visit her at Claire-Legrand.com and on Twitter @ClaireLegrand.