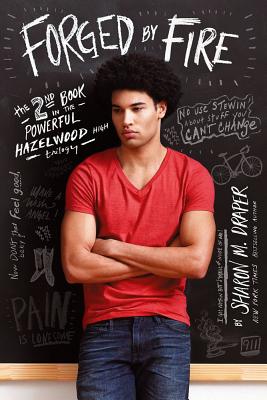 This is book number 2 in the Hazelwood High Trilogy series.

When Gerald was a child he was fascinated by fire. But fire is dangerous and powerful, and tragedy strikes. His substance-addicted mother is taken from him. Then he loses the loving generosity of a favorite aunt, and a brutal stepfather with a flaming temper and an evil secret makes his life miserable. The one bright light in Gerald's life is his little half sister, Angel, whom he struggles to protect from her father, who is abusing her.

Somehow Gerald manages to finds success as a member of the Hazelwood Tigers basketball team, and Angel develops her talents as a dancer, despite the trouble that still haunts them. And Gerald learns, painfully, that young friends can die and old enemies must be faced. In the end he must stand up to his stepfather alone in a blazing confrontation.

In this second book of the Hazelwood High trilogy, Sharon M. Draper has woven characters and events from Tears of a Tiger in an unflinchingly realistic portrayal of poverty and child abuse. It is an inspiring story of a young man who rises above the tragic circumstances of his life by drawing on the love and strength of family and friends.
Sharon M. Draper is a three-time New York Times bestselling author and a recipient of the Margaret A. Edwards Award honoring her significant and lasting contribution to writing for teens. She has received the Coretta Scott King Award for both Copper Sun and Forged by Fire and was awarded the Charlotte Huck Award for Stella by Starlight. Her novel Out of My Mind has won multiple awards and was a New York Times bestseller for over three years, and Blended has also been a New York Times bestseller. She taught high school English for twenty-five years and was named National Teacher of the Year. She now lives in Florida. Visit her at SharonDraper.com.
“Draper creates believable and important heroes for teenage boys--those who are forged from adversity, only to burn more brightly and courageous.”
— Amazon.com

“With non-stop excitement, this is well-written, easy to read, and possibly an inspiration for anyone trapped in family situations involving child abuse or domestic violence.”
— VOYA