What My Girlfriend Doesn't Know (Paperback) 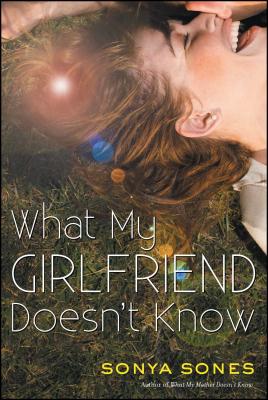 What My Girlfriend Doesn't Know (Paperback)


Email or call for price.
A teen boy confronts the complications of love in this relatable free verse novel featuring a new cover and larger trim size.

Don’t get me wrong—my girlfriend’s amazing.
But the way things have been going lately,
I’m starting to believe that the only thing worse
than not getting what you want,

Picking up where What My Mother Doesn’t Know leaves off, this is the story of what happens next—told from the perspective of Murphy, Sophie’s new boyfriend. And even though Murphy’s thrilled to be with Sophie, the consequences of their relationship—and the temptations outside of it—force him to consider everything he knows about love. Told in free verse and brimming with authenticity, this novel provides unique insight into the mind of a young man.
Sonya Sones has written five YA novels-in-verse: To Be Perfectly Honest (A Novel Based on an Untrue Story), Stop Pretending, One of Those Hideous Books Where the Mother Dies, What My Mother Doesn’t Know, and its companion, What My Girlfriend Doesn’t Know. Her books have received many honors, including a Christopher Award, the Myra Cohn Livingston Poetry Award, and a Los Angeles Times Book Prize nomination. But the coolest honor she ever got was when What My Mother Doesn’t Know made it onto the American Library Association’s list of the Top 100 Most Banned Books of the Decade (to see why, see p.46). She lives near the beach in southern California, and only tells the occasional fib. Visit her at SonyaSones.com or follow @SonyaSones on Twitter.