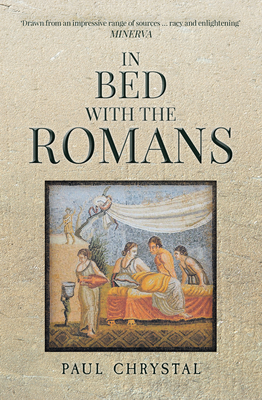 
Usually Ships in 1-5 Days
One way or another the Romans spent quite a lot of time in bed, in between conquering and civilising the known world. The men were intent on demonstrating their power and virility; the women were busy conceiving, delivering and raising as many children as possible, in order to keep Rome topped up with soldiers, politicians and workers.In Bed with the Romans takes the clothes off Roman society to reveal the truth about sex and sexuality. It describes love and marriage; the role of the wife in the family and in religion, as well as in bed; and sexual medicine, homosexuality, pornography and pederasty. All manner of sexual behaviour is covered in this comprehensive and balanced discussion of the Roman relationship with sex.Paul Chrystal vividly describes the sexual predilections and debauchery of the Roman emperors and their empresses and mistresses, and draws his conclusions from literature, ancient graffiti, inscriptions and the visual arts that form the bedrock of this book.
Paul Chrystal was educated at the Universities of Hull and Southampton where he took degrees in Classics and wrote his MPhil thesis on attitudes to women in Roman love poetry. He appears regularly on BBC local radio the World Service. He is the author of over fifty books on a wide range of subjects, including histories of northern places, social histories of tea and of chocolate, a history of confectionery in Yorkshire and various aspects of classical literature and Roman history.