The New York Times Book of Medicine: More Than 150 Years of Reporting on the Evolution of Medicine (Hardcover) 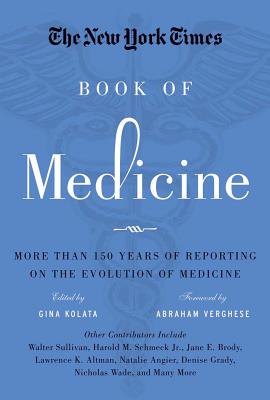 The New York Times Book of Medicine: More Than 150 Years of Reporting on the Evolution of Medicine (Hardcover)


Email or call for price.
Today we live longer, healthier lives than ever before in history--a transformation due almost entirely to tremendous advances in medicine. This change is so profound, with many major illnesses nearly wiped out, that it's hard now to imagine what the world was like in 1851, when the New York Times began publishing. Treatments for depression, blood pressure, heart disease, ulcers, and diabetes came later; antibiotics were nonexistent, viruses unheard of, and no one realized yet that DNA carried blueprints for life or the importance of stem cells. Edited by award-winning writer Gina Kolata, this eye-opening collection of 150 articles from the New York Times archive charts the developing scientific insights and breakthroughs into diagnosing and treating conditions like typhoid, tuberculosis, cancer, diabetes, Alzheimer's, and AIDS, and chronicles the struggles to treat mental illness and the enormous success of vaccines. It also reveals medical mistakes, lapses in ethics, and wrong paths taken in hopes of curing disease. Every illness, every landmark has a tale, and the newspaper's top reporters tell each one with perceptiveness and skill.
Gina Kolata is a senior writer at the New York Times, where she reports on science and medicine; and a two-time Pulitzer Prize finalist. She has written several books, including Rethinking Thin: The New Science of Weight Loss--and The Myths and Realities of Dieting, which was a finalist for the Quill book awards, and the national bestseller Flu: The Story of the Great Influenza Pandemic of 1918 and the Search for the Virus that Caused It (both Farrar, Straus and Giroux).