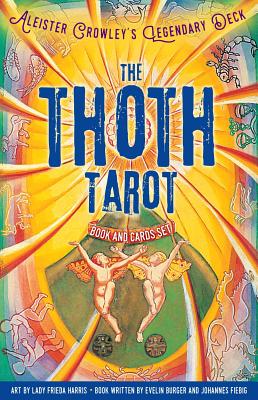 A new kit featuring one of the world's bestselling and most popular tarot decks The Thoth Tarot was the result of five years of painstaking effort by legendary occultist Aleister Crowley, who--in conjunction with artist Lady Frieda Harris--reinterpreted the traditional 78-card tarot deck to adhere to Crowley's own philosophies as well as esoteric knowledge of everything from science to alchemy to astrology and the Kabbalah. This kit contains everything a reader of the Thoth Tarot might need, including an authoritative 96-page book from authorities Johannes Fiebig and Evelin Burger that delves deep into the arcane layers informing each card plus 78 cards: 22 reinterpretations of the major arcana and 56 of the minor arcana, all painted with flaming intensity and rich in symbolism. The result is a clearer understanding of this powerful deck and all of the secrets that it holds.

Evelin Burger and Johannes Fiebig have written more than 30 books on tarot--including The Ultimate Guide to the Rider-Waite Tarot and The Ultimate Guide to the Thoth Tarot (both Llewellyn) and the interpretation of dreams, fairy tales, and other symbols and oracles, which have been translated in more than 10 languages and have sold more than 1.7 million copies. They have two adult children, and live near Kiel at the Baltic Sea, Germany. For more information, go to fiebig-und-buerger.de. Aleister Crowley (1857-1947) was a world-renowned English master of the occult, an author, a magician, and founder of the philosophy of Thelema, a religion with its roots in ancient Egyptian mythology and both eastern and western mysticism. Lady Frieda Harris (1877-1962) was an artist and associate of Aleister Crowley. She combined her skills as a painter with her knowledge of Rudolf Steiner's Anthroposophy to create the visualization of the Thoth tarot system.