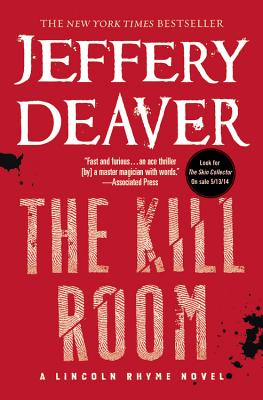 "This is Deaver at his very best and not to be missed by any thriller fan."—Publisher's Weekly (starred review) on The Kill Room - A "Best Summer Book of 2013"

"Deaver, who can't resist any opportunity for ingenuity... keeps mixing fastballs, curveballs and change-ups."—Kirkus Reviews on The Kill Room

"Fans will appreciate Deaver's customary detailing of each plot sequence, thereby heightening their anticipation of the upcoming clincher. Thriller aficionados will be lining up for this one."—Library Journal on The Kill Room

"Jeffery Deaver has written an ace thriller to keep readers guessing and gasping with his latest Lincoln Rhyme thriller, The Kill Room. A master magician with words, Deaver misdirects with one tale while what's really going on is just off the reader's radar...The numerous twists and turns in The Kill Room are so fast and furious that by the novel's end, the reader will be dizzy - and clamoring for more."—Associated Press on The Kill Room

"Not even the brilliant Rhyme can foresee the shocking twists the case will take in this electrically charged thriller."—Publishers Weekly, (Starred Review) on The Burning Wire

"A taut psychological thriller from a masterful crime writer, proving Deaver just gets better with each new novel."—June 2010 Indie Next List Great Reads list on The Burning Wire

"Deaver's scarily believable depiction of identity theft in a total-surveillance society stokes our paranoia. A -."—Entertainment Weekly on The Broken Window

"Rhyme is one of the mystery genre's most interesting and out-of-the-ordinary series leads...As always, Deaver's dialogue is exceptionally realistic, and his plotting is devilishly intricate. Recommended for fans of the Rhyme novels (naturally) and readers who like their thrillers laced with wit and sharp characterizations."—Booklist on The Broken Window