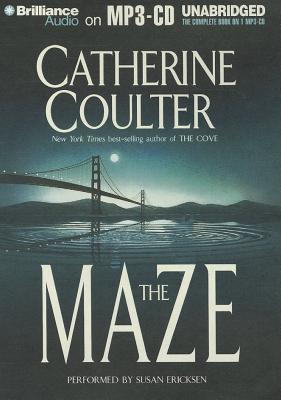 By Catherine Coulter, Susan Ericksen (Performed by)
Email or call for price
Out of Print - This Title is Unlikely to be Available.

This is book number 2 in the FBI Thriller (Audio) series.

Lacey Sherlock's life is forever changed when her older sister's body is discovered in an abandoned warehouse. She is the fourth victim of the String Killer, the name given by the media to a murderer who leads his victims into a maze with a ball of twine. Seven years after Belinda's death, Lacey, now an FBI agent, is paired up with computer whiz Dillon Savich, who has developed a predictive program to aid in the apprehension of serial killers.

When the String Killer strikes again, Lacey spots his handiwork, resulting in his capture. The suspect confesses, but maintains that he did not kill Belinda. No sooner does Lacey confirm his innocence of that crime, than an attempt is made on her life. Suspecting her attacker is the same person who murdered her sister, Lacey and Dillon know they must solve the mystery--before they become the killer's next victims.