Comic Sections Plus: The Book of Mathematical Jokes, Humour, Wit and Wisdom (Paperback) 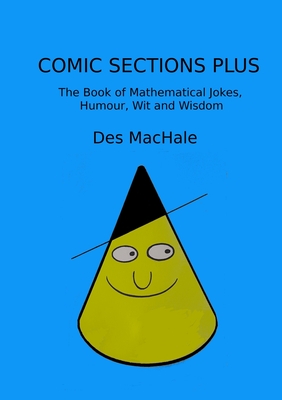 Comic Sections Plus: The Book of Mathematical Jokes, Humour, Wit and Wisdom (Paperback)


Usually Ships in 1-5 Days
Comic Sections Plus is a revised and greatly expanded edition of the hugely popular book Comic Sections, published by Boole Press in 1993, and now long out of print. It is the biggest (and best ) compendium of material ever published relating to mathematical jokes, anecdotes, humour, wit and wisdom. The author writes: Much of Comic Sections Plus is devoted to 'anecjokes', that is, stories, jokes and anecdotes about mathematics and mathematicians, or jokes with a mathematical or logical content. I firmly believe that such material is not necessarily flippant, but has a serious if not essential role to play in the study, understanding, and popularisation of mathematics. Mathematics and humour are actually closely related and we can easily find structural links between the theorem and the joke. The mathematical problem and the facetious riddle have a lot in common too, and logic is undoubtedly a connecting link; mathematics is regarded as ultra-logical, while humour is often ultra-illogical, turning logic on its head. One rarely meets the legendary 'absentminded mathematician' in reality and in fact the level of appreciation of humour among mathematicians seems to be quite high, at least as great as that of any other profession. This is perhaps because mathematicians are quick to spot logical fallacies and also have to endure a considerable amount of jokes and humour, often made by other scientists. In addition, humour can be an excellent aid to teaching mathematics, as long as it is used skilfully and carefully. Historically, there have been several mathematical humorists, humorous mathematicians, and people with a foot in both camps. We may cite Lewis Carroll, Stephen Leacock, Tom Lehrer, Martin Gardner, Charles Babbage, John Paulos, Paul Erdos, Leo Moser, James Clerk Maxwell and John Horton Conway. This book draws on the contributions of these great luminaries, but also features the amusing blunders of the 'geniuses' at the other end of the spectrum of mathematical talent. Sadly, mathematics has the reputation of being the least popular and most difficult subject in school and college. We really cannot afford this state of affairs to continue, because mathematics is essential to virtually all human activity, since it is the basis of all organised knowledge. Perhaps the problem is that the subject has always been taken too seriously. Comic Sections Plus is an attempt to lighten mathematics, to make it more enjoyable, and above all to humanise it.