Hooked: Addiction and the Long Road to Recovery (Hardcover) 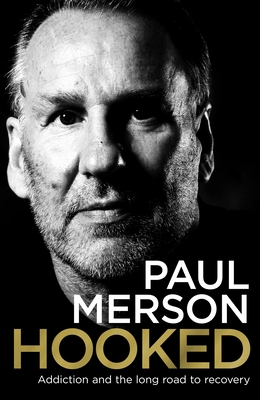 By Paul Merson
Email or call for price
Out of Print - This Title is Unlikely to be Available.

Shortlisted for the 2022 Sports Book Awards

'brave ... visceral ... a brilliant, brilliant read ... I would recommend this book to everyone.' Nihal Arthanayake, BBC Radio 5 Live

'so honest ... everybody should read Hooked to understand what anybody in this situation has been through.' Susanna Reid, Good Morning Britain

For twenty-one years Paul Merson played professional football. He won two First Division titles with Arsenal and was one of the finest players of his generation.

But for thirty years Paul Merson has also been an addict. Alcohol, drugs, gambling: a desperately unenviable cocktail of addictions and depression which has plagued his entire adult life and driven him to the verge of suicide. 'I've come to realise that I'm powerless over alcohol ... I'm an alcoholic. My drinking and gambling have left a lot of wreckage.'

Until recently the drinking and gambling were still raging. 'I wanted to kill myself. I couldn't go on anymore. I just couldn't see a way out.' Then something clicked. 'One day, I was walking home from the pub late on a Sunday evening, and I thought to myself: I've had enough of feeling like this, every day of my life. I rang up Alcoholics Anonymous the next day, and since then I haven't had a drink.'

Hooked is Merson's wonderfully moving and brutally honest memoir of battling addiction, searingly charting his journey over three decades. It is absolutely unflinching in detailing his emotional and psychological troughs and in raking over the painful embers of an adult life blighted by such debilitating issues. Hooked will kick-start a crucial national conversation about addiction, depression and the damage they wreak.

'Addiction is the loneliest of places. You're a slave to insecurity and ego. But it has to be you that wants things to change. Never be afraid to talk: the more you talk about the addictions the more it takes the power out of them. You're never alone.'

Paul Merson was born in Harlesden in March 1968.

He made his debut for Arsenal in 1986, and in a 12-year stint at Highbury he won the First Division twice, the FA Cup, the League Cup and the European Cup Winners' Cup. He also won 21 caps for England.

Merson went on to play for Middlesbrough, Aston Villa and Portsmouth, as well as Walsall - where he was also manager.

Following retirement in 2006, Merson has become a high-profile football pundit for Sky Sports. He is a long-serving member of the team on Soccer Saturday, the iconic results show, and also writes a regular column for the Daily Star newspaper.

Even when baring his soul, Paul Merson is entertainingly fluent in the language of football. The Merse's new book, Hooked, is frank, sometimes funny, often horrifying.—Irish Examiner